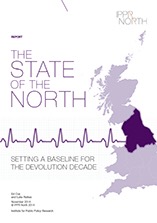 The deep and abiding challenges that the North continues to face have been made worse by both the recent recession and cuts to government spending.

That is the summary of a new report by IPPR North, marking ten years since its launch and highlighting the most important trends in the north of England over the last decade.

While the region continues to face a number of challenges, particularly since the global recession, and fares badly relative to other English and European cities and regions in some key respects, there are also reasons for optimism says the authors.

Prior to the recession, most parts of the North kept pace with average rates of economic growth on many counts; its structural problems are slowly being corrected, and certain places show signs of real prosperity and innovation.

There is also a strong sense that while the North knows the ingredients of success, they now need to be brought together both nationally and locally.

Cities such as Greater Manchester and the Leeds city-region are experiencing rapid jobs growth, and rural areas like Cumbria and Cheshire have consistently ranked among the top 10 fastest-growing economic areas in the country over the past decade.

Indeed, During 2011/12, the number of workplace jobs in Greater Manchester grew at a rate of 3.2 per cent, compared to a national average of 0.5 per cent.

The region is losing out on investment because government spending is skewed towards London and Scotland, IPPR North claims.

According to the report, the North contributes nineteen per cent to the national economy, compared to thirteen per cent for Scotland, Wales and Northern Ireland combined.

However, in the decade to 2012 the North grew at a slower rate with devolved nations spending much more per head on boosting their economies through research & development, skills and infrastructure investment, the report says.

Among this conclusions are that starting with the big cities, central government must free local areas to realise their potential for economic growth and in order to compete in the global economy, northern regions must work more collaboratively as a well-connected northern ‘super-region’ with economic weight and political muscle.

You can read the full report HERE

Manchester’s voice calls for Greater devolution for our cities