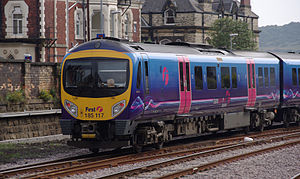 New legal powers to give the North an unprecedented say on how money is spent on transport were announced today  by Transport Minister Jesse Norman.

Legislation to transform TfN into the first ever statutory sub-national transport body – with legal powers and duties – were laid in Parliament.

However unlike Transport for London, the final say will remain with the Secretary of State for Transport.

The announcement comes after criticism that the government was de prioritising Transport across the North with doubts of electrification of the cross Pennine route and expansion of Mamchester’s Piccadilly Station.

The Department for Transport also today confirmed the award of £18.5 million from a £150 million government fund for TfN’s smart ticketing programme.

TfN will use this to introduce paperless, smart card season tickets for Northern and TransPennine Express and Merseyrail passengers by the end of 2018.

The remaining funding is available for proposals to extend smart ticketing across public transport in the North, giving passengers more flexibility and a better integrated travel experience, including the ability to renew tickets online, fewer queues at stations and faster journeys through ticket barriers.

We are committed to the Northern Powerhouse, and to giving the great towns and cities of the North more say over transport investment through their umbrella body TfN. This government is investing the most cash for a generation in transport projects for the North. These new powers will give TfN far greater influence over national infrastructure decisions, as well the certainty they need to plan and drive forward projects such as Northern Powerhouse Rail and smart ticketing.

However Labour’s Andy McDonald MP, Shadow Transport Secretary, has slammed the move which has confirmed that Transport for the North’s status is to be downgraded from client status to statutory influencer.

“The Tories justified slashing investment in rail in the North by saying they would devolve powers for the North to address its own transport needs. Today’s announcement that the status of Transport for the North is to be downgraded confirms that the Conservatives’ promises of devolution, like promises of investment, aren’t worth the paper they are written on.

“It’s unfair that all the regions of the North combined receive less in transport investment compared to London, despite the North having twice the population. It is clear the Government aren’t serious about the so-called Northern Powerhouse or rebalancing the economy.

“Only Labour is committed to closing regional divides and delivering both the powers and the investment needed to deliver the transport infrastructure the North so badly lacks, including at least a £10billion commitment to building a Crossrail for the North.”