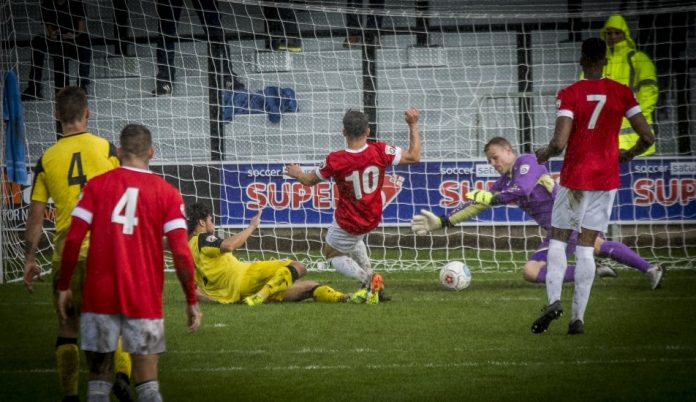 A brace from Jack Redshaw capped a great team performance as league leaders Brackley Town lost for the first time this season. The Ammies sit level with leaders Harrogate Town after the weekend result.

Stockport County lost on the road for the second time running, after an impressive York City side netted twice before half an hour had been played at Bootham Crescent after Jim Gannon had named an unchanged starting line-up for the first time since the beginning of April.

Meanwhile a Max Leonard Goal was the difference between the two sides as  Curzon Ashton beat FC United at the Tameside Stadium, the win puts Curzon five points ahead of FC who occupy the last place in the relegation zone.

In the Evo Stik Premier League, Stalybridge will be hoping that their bad start to the season is well and truly behind them after a three one win over Stourbridge at Bower Field in  a scintillating second half display that the visitors had no answer to.

Altrincham are up to eighth in the table after goals from Harrop, Hancock and Peers saw them win 3-1 at Barwell while an injury time penalty grabbed a dramatic late winner for the Whitby Town after Ashton had drawn level with just 3 minutes left at the Turnbell Ground.

Liam Tomsett had put the Robins in front in the fisrt half before goals from Kieran Weledji and Tymon gave the Seasiders the lead but ashton must have thought they were going to leave with a point after Pritchard tried his luck from distance and saw the ball deflect into the opposite corner off McGoldrick.

Droylsden are third in the North Division, their run of six wins coming to an end after an exciting 3-3 draw at Kendal Town which saw the Bloods come back three times from being behind.

Hyde United are fifth after a 2-0 win at Skelmersdale, second half goals from Khamsuk and Porritt securing the points for the Tigers while Mossley are twelth after they returned to winning ways at Seel Park with a goal in each half by Liam Ellis was enough to secure the points with a 2-0 victory over in form Prescot Cables.

Trafford’s disastrous start to the season continued on Friday night when they were defeated 3-1 at second placed Ramsbottom United extending their winless run to nine games and Radcliffe’s season continues in a bad way after they went down 2-1 at home to Bamber Bridge, having just three points from their first six games