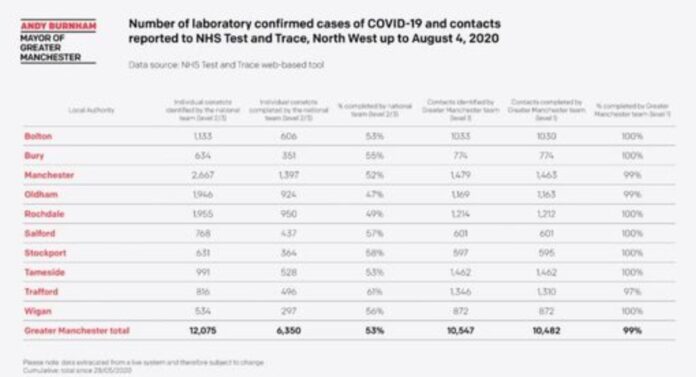 NHS Test and Trace should pass on the contact details of the people they cannot reach to the local authority within 48 hours, allowing local contact tracers to reach people on their doorsteps says Greater Manchester’s Mayor Andy Burnham.

During this afternoon’s Greater Manchester’s Covid press conference, it was revealed that the national system was reaching just over fifty per cent of the contacts of people who has tested positive for the disease yet the local tracing team had reached practically all of them.

The Mayor called once again for more access to the national data as a way of localising information as he described the last few days as being difficult for the region.

Yesterday Blackburn with Darwen revealed that it has set up its own local trace and track system and a system like that could also be imposed on our region. Rochdale could be the first to introduce one before the end of the week.

During the press conference Sir Richard Leese said that oldham is still rated red for infection rates while six of the other nine Greater Manchester regions are ‘amber’.

There’s been virtually no change in hospital admissions, although the numbers are slowly coming down.