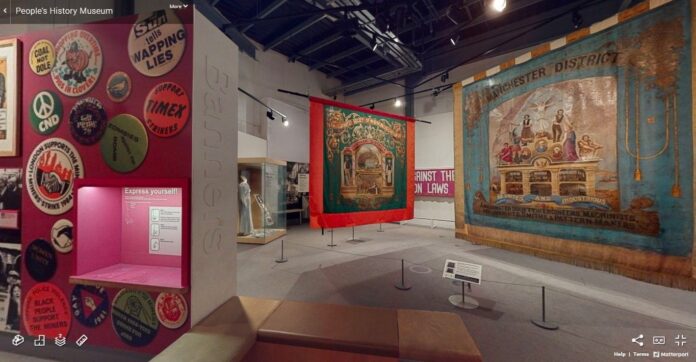 Although the doors to People’s History Museum (PHM) will be closed as part of the national lockdown during November, this marks the start of a series of new ways to discover the stories, collections and spirit of the national museum of democracy.

The launch of exciting digital developments and some must watch TV appearances mean there are lots of ways that the national museum of democracy can still be enjoyed until it reopens on Thursday 3 December 2020.

A partnership with Google Arts & Culture opens up the opportunity to discover some of the historic and contemporary stories told at People’s History Museum, from the Peterloo Massacre to Black Lives Matter.  You can also join actor Alfred Enoch as he takes a Google ‘Art for Two’ tour of the galleries with Jenny Mabbott, Head of Collections & Engagement at PHM; how the vote was achieved, the founding of the NHS, the rights of working people, protest movements and much more are all part of the conversation.

Alfred Enoch, says “I feel very lucky to have got a personal virtual tour of People’s History Museum. Amid all the turmoil and tribulations of this year, it feels a very apt time to reflect on the history of democracy in our country and its achievements; not least the foundation of the NHS. Hopefully the Art for Two tour will enable more people to access the museum’s collection while its doors are closed.”

Join Alfred on a virtual tour of PHM.

You can also take your own tour of the museum’s galleries from anywhere in the world, thanks to the use of 3D technology and a project led by The University of Manchester.  You can see the banners on display, explore the kitchen of suffragette Hannah Mitchell, meet the radicals whose stories are told, see rare artefacts from the Peterloo Massacre and much more.  The high resolution images mean a fantastic user experience and the chance to spend time in the galleries in a way that’s not previously been possible.

Jenny Mabbott, Head of Collections & Engagement, says, “The stories and collections that People’s History Museum holds reflect the unique exploration of British democracy; past, present and future.  These are stories that have meaning and relevance to people’s lives today, which makes them incredibly powerful.  As well as people being able to visit the museum when we reopen, we want to reach out to inspire people with the achievements of those who have fought and championed for rights, freedoms and equalities and those who are continuing these quests in today’s world.”

“We are excited to be able to share some of the work we’ve completed that sees us making huge advancements in the digital accessibility of the museum through collaborations and partnership work.”

On Friday 13 November viewers will be able to see historian Lucy Worsley’s visit to the museum earlier this year unfold, when Royal History’s Biggest Fibs With Lucy Worsley airs on BBC Two.  In it she explores the Regency period, a time of Georgian elegance and Jane Austen romances, but also a period when heightened demand for political reform would lead to the Peterloo Massacre.  This is one of the museum’s headline stories and Lucy’s visit included the opportunity to see a rare Peterloo cane and to find out more about the events this treasured artefact witnessed.

Lucy Worsley says, “I’m so grateful to People’s History Museum’s Dr Shirin Hirsch for showing me the cane owned by the radical Mr Charles Worsley (not to my knowledge a relation of mine but I’d claim him if I could).  It might be ‘only’ a walking stick, but it has such a powerful story to tell about how the authorities silenced the peaceful protestors at Peterloo.”

Political reform is also the subject of PHM’s appearance on series 3 of Channel 4’s Britain’s Most Historic Towns.  Professor Alice Roberts visited the museum to see a 1908 Manchester suffragette banner, and to find out more about the city’s role as ‘First in the Fight’ and the history of the suffragette movement that was founded in Manchester by Emmeline Pankhurst in the early 20th century.

Both the Peterloo cane (until 3 January 2021) and the Manchester suffragette banner (until Sunday 14 March 2021) will be on display at People’s History Museum when the museum reopens on Thursday 3 December 2020.

You can register in advance to visit the museum when it reopens on Thursday 3 December 2020.  Entry is free with a suggested donation of £5; all donations support the museum, helping PHM continue to champion ideas worth fighting for.  For further information visit phm.org.uk and to keep in touch you can sign up to the e-newsletter, subscribe to the blog, or follow the museum on social media on Twitter @PHMMcr, Facebook @PHMMcr, and Instagram @phmmcr.

How the pandemic has impacted how we see the arts

How to Succeed in the Hospitality Industry