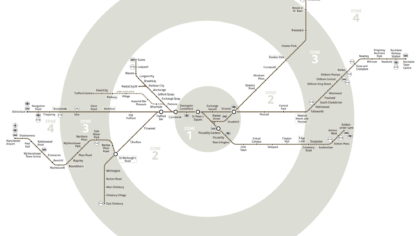 Plans to introduce a simpler, more flexible fares and ticketing system on Metrolink have been given the green light by council leaders, paving the way for a fully-integrated ticketing system for Greater Manchester.

The four zone system – which will deliver easy to understand and better value fares for millions of passengers across the network – will be introduced in early 2019, alongside the pre-planned fare increase.

When factored in, 78.5% of fares are lower under the zonal system than they would have been under the current system, while 10% are the same and 11.5% are higher.

Greater Manchester Combined Authority (GMCA) provisionally approved the plans in May, subject to the results of a public engagement exercise which were presented today (Friday 27 July).

The engagement activity set out to highlight the rationale and benefits of the plans – including proposed zones and fares – and to seek views and feedback from the public to help inform the final design.

The main areas of focus were on the convenience, simplicity and value for money of the zonal proposal compared with the current fares system.

Almost 5,000 people (4,981) completed the survey, while 23,000 people visited the webpage. Awareness of the proposal was also generated through social media, with 139,020 impressions generated on Twitter and Facebook content reaching 224,521 people.

As a result of the engagement activity one change has been made to the zones, with Whitefield replacing Besses o’ th’ Barn as the zone 3/4 ‘boundary stop’.

Mayor of Greater Manchester Andy Burnham, said: “A zonal system on Metrolink is the springboard to a better integrated, simpler and easier to use transport network.

“Simplifying the fares and ticketing system in Greater Manchester will ultimately make travelling by public transport a more attractive option, which is absolutely vital if we are to tackle congestion and improve air quality – two of the most challenging issues facing us today.”