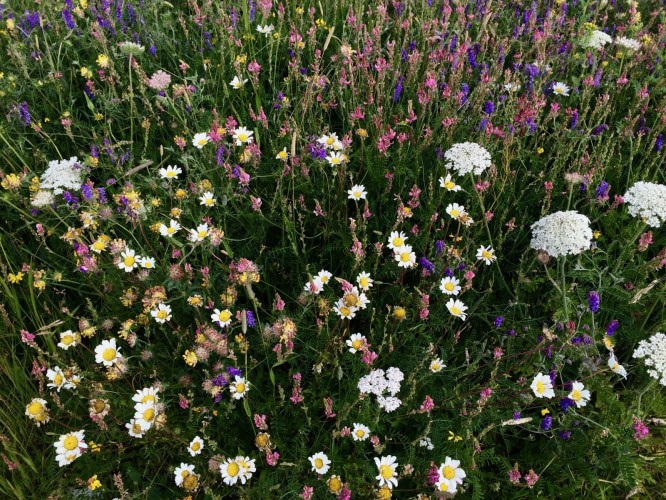 A three-year experiment by ecologists from The University of Manchester, the Centre for Ecology & Hydrology and Lancaster University has revealed how our iconic chalk grasslands – damaged by intensive farming – could be regenerated.

The study of an area on Salisbury Plain, degraded by years of cultivation, revealed how combinations of plants based on their size and shape could restore soil fertility in chalk grasslands.

Up to 40 plant species—including orchids and wildflowers- grow in a square meter of typical British chalk grassland, attracting insects and rare butterflies and birds. It also acts as an important carbon store, which helps mitigate against the effects of climate change.

But because of intensive farming, tourism and housing, Britain has lost 80% of its chalk grassland since the Second World War.

The research, funded by the Natural Environment Research Council (NERC) and published in the journal Ecology, showed certain characteristics or traits of plants play a critical role in regeneration of soil fertility.

“Our study showed the structure and depth of plant roots, as well as plant height, could tell us how long it may take for grassland to recover from degradation caused by intensive farming”, said Dr Ellen Fry, from The University of Manchester, the lead author of the study.

“We also found that a mixture of deep and shallow roots is crucial to enable the grassland to buffer severe drought, which is becoming increasingly common with climate change.

“The key to restoration is to ensure that the soil microbial community and nutrient and water use are restored and protected against climate change, as well as the plant species.

“If, at least during early stages of restoration, plant species are sown based on their traits, we argue that restoration of functions such as water and nutrient cycling could occur as quickly as between 20 and 30 years.”

The study showed that plants less than about 10cm tall were best for soil quality, and that deep tap root systems are also essential for boosting the health of soil.

In contrast, taller plants, even though they grow quicker, are poorly adapted to the hardships chalk imposes, particularly because they are likely to have higher requirements for nutrients and water.

Dr Fry added: “Deep tap roots are crucial for withstanding drought conditions and maintaining nutrient cycling. However, bushy fibrous root systems, like those seen in many grasses, are more important for high rates of nutrient cycling and linking with the microbial community.

“Simply weeding out plants which are too dominant is also highly likely to help reinstate a well-functioning and resilient ecosystem.

“Of course, if factors such as the use of pesticides, overgrazing and the impact of tourism and housing still continue to be a factor, our chalk grasslands will still be under threat. I hope that will one day be reversed.”

Professor Richard Bardgett, one of the co-authors of the study, said: “These results are important because they suggest that we can design plant communities, based on knowledge about how they affect soil, to accelerate the recovery of degraded soils.”

Professor James Bullock, from the Centre for Ecology & Hydrology, added: “Habitat restoration is at the heart of attempts to reverse biodiversity losses, but our study also shows how we might use restoration to make ecological systems more resilient to climate change and other threats.”