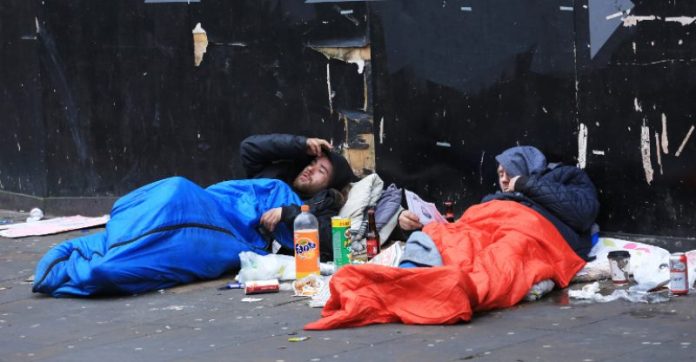 Wide ranging measures to help the hundreds of rough sleepers across Greater Manchester have been revealed including £1.8m of new funding.

The Mayor of Greater Manchester Andy Burnham said the money, one of just eight social impact bonds (SIB) approved and the largest outside of London, will help to provide accommodation, intensive health support and improvements in the way homeless people are encouraged into education or work for up to 200 people.

The news comes just two weeks after the Mayor called on all public bodies in Greater Manchester to work together to end homelessness and rough sleeping with immediate action.

Representatives from all of those organisations attended a meeting of Greater Manchester’s Reform Board met to suggest wide ranging, practically-focused actions that could be taken to ensure homelessness and rough sleeping are immediately reduced.

These actions include an immediate call to the Government to halt the roll out of the Universal Credit benefit scheme, which all members of the Reform Board agreed was fundamental to reducing rough sleeping and homelessness across the city region.

The Mayor said: “This is not a political point. I am speaking for the entire board – the entire public sector in Greater Manchester – when I make this plea to the Prime Minister and Government. You must suspend the roll out of the Universal Credit benefit. It was a unanimous view in the meeting that Universal Credit will make the homeless and rough sleeping problem here dramatically worse. I say in all sincerity, please listen and put it on hold. If it goes ahead as planned we will see a much greater problem unfold in front of our eyes.”

Amongst other measures announced was a £1.8million Social Impact Bond (SIB) – a Government-backed bond using money provided by the private sector to deliver improvements including finding and keeping a home, making sure support is provided to find employment, education or training, providing
intensive support around people on an individual basis and enabling people to access specialist support services around mental health and addiction

It is expected that the new service will be on the streets of Greater Manchester by the end of October, helping people during the critical winter months.

There has also been a commitment to opening all 41 fire stations across Greater Manchester to be used to support homeless people, partnering with community and voluntary groups to provide a range of services such as food and drink.

The Mayor said: “I have made ending rough sleeping in Greater Manchester a personal priority and these developments represent a major breakthrough on that journey. This new money will provide real solutions to help people to get off the streets and find warmth, safety and a better life with work.

“But while it is major progress, there is still a huge challenge in front of us. There is good work already being done across Greater Manchester by our councils and others but with so many people on the streets we always have to challenge ourselves to go further.

“This is a crisis unfolding before our eyes and will only be solved if we work as one and bring the contribution of public, private and voluntary sectors together. We have to think differently and try new ideas and ways of improving the lives of hundreds of people who don’t have a home to call their own.”