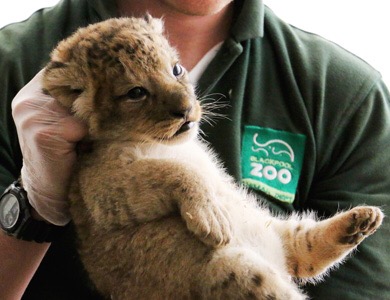 A tiny lion cub is all set to make his debut at Blackpool Zoo.
One of the zoo’s two lionesses, Rachel, gave birth in the early hours of Sunday 31st May and the little boy has been named Kahri, which means like a king in Africa.
Father, Wallace, and aunty, Gillian, complete the pride and, in line with the social order of a group of lions, the two females will work together to bring up the new arrival and the father will get more involved as the cub matures.
Rachel has bonded well with her son in the Big Cat House, which is now open for her to introduce him to the visitors. Only time will tell when she decides to carry him out to meet his adoring public.
First time mother, Rachel, gave birth to two lion cubs but initial health checks showed that the smaller of the two had a serious developmental problem and the very sad decision was made to euthanize him.
The second, larger cub is making excellent progress and the staff and veterinary team are delighted.
It is the first time Blackpool Zoo has celebrated the birth of lion cubs since 2009, when Rachel’s half sister Gillian, gave birth to female triplets.
The cubs, who were called Luna, Kimya and Nikita, left Blackpool in 2011 to begin an exciting life together as the foundation of a brand new pride at Longleat Safari Park. They settled in very well and now have cubs of their own.
Adam Kenyon, Section Head of Mammals at Blackpool Zoo, said: “We are absolutely delighted to announce the birth of a healthy lion cub.
“We had prepared the cubbing den because we knew the birth was imminent and our keepers waited with baited breath for them to arrive.New babies are always a cause for real celebration here at Blackpool Zoo as it means the group is content with their surroundings, which is testament to the fantastic job our keepers do. It’s very sad that we lost one of the cubs, but these decisions are never taken lightly.

Rachel is 13 years old and was born in Blair Drummond Safari Park in Scotland. She came to Blackpool Zoo in 2007. Wallace arrived a year later from Longleat, where he was born in 2006.