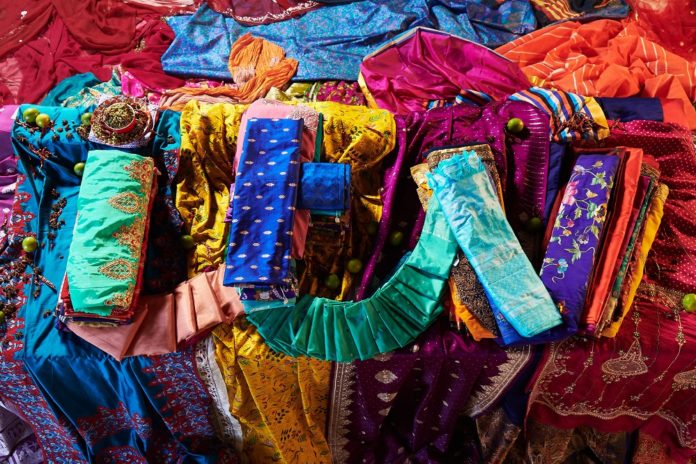 Artist Sutapa Biswas has produced a new on-screen identity for ITV to celebrate its commitment to creativity and British culture for the last 50 years.

Biswas, a Reader in Fine Art at Manchester School of Art, Manchester Metropolitan University, is one of a number of artists who have produced new work for the ‘ITV Creates’ campaign.

As part of ITV Creates, each week throughout 2019, ITV’s on-screen idents will change to reflect an artist’s interpretation of the ITV logo.

From January 7-13, Biswas’ work which comprises over 150 saris loaned mainly from friends and family of South Asian parentage living in the UK, will be broadcast each day to national TV audiences.

She said: “Working in collaboration with ITV has been hard work, but a wonderfully pleasurable experience.

“The underlying themes of my new piece are continuous of key thematic interests I have explored in my work as an artist since 1984 wherein fabric, textiles and pattern have been recurrent motifs.

“Influenced by my research and interest in colonial histories of global trade in textiles between the UK and India, for this new work I was keen to thematically explore this further via the oral narratives both past and present using the sari as a metaphor. The interweaving of larger grand historical narratives with the everyday, is part of a long tradition of theatre and ritual which is evident in India, including within embroidery found in everyday objects in different regions of the Indian subcontinent. The concept of ‘story-telling’ and ‘spatial stories’ has long been a presence within my approach to making art.

“In producing this new piece for ITV, it was therefore important to me as an artist that I weave into the ‘cultural landscape’ of ITV, television and into the ‘fabric’ of UK life, part of this complex history.”

Biswas, an internationally renowned artist, has explored similar themes in earlier works from ‘Housewives with Steak-knives’ (1985), through to subsequent commissions by a range of arts organisation, including the PlugIn Gallery of Contemporary Art, 1993 (Winnipeg, Canada) in collaboration with Locus+ (Newcastle Upon Tyne, UK), Henie Onstad Kunstsenter, Oslo, in 2001 as part of ‘Art Through the Eye of A Needle’, ‘Flights of Passage’ commissioned by Tate Britain in 2014/15 and ‘Mixed Bathing World 2015 Triennial’ in Beppu, Japan.

The ITV Creates project is intended to emphasise and reflect the creativity at the heart of the broadcaster’s business.

Each artist’s work has been filmed and produced into a set of idents by ITV’s in-house creative agency, ITV Creative.

New law could ring changes for buses in Greater Manchester