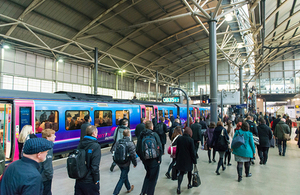 Digital signalling technology is already in operation on the London Underground, and Network Rail will now develop options to make the TransPennine route the first digitally controlled intercity rail line in the country.

Network Rail will receive up to £5 million to develop proposals for embedding digital technology between Manchester and York, to help ueliver a more reliable and safer railway.

This includes looking at a system of advanced train traffic management – so that a computer works out how to route the trains most efficiently along the line.

Developing proposals for digital-control on the TransPennine route is to be paid for from a £450 million digital railway fund announced by the Chancellor in the Autumn Statement last year.

On the London Underground 3 lines already have in-cab signalling, which has meant trains can safely run closer together.