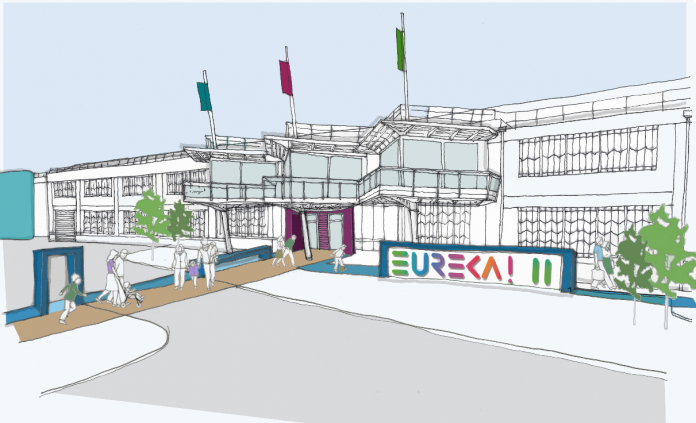 National Children’s Museum Eureka! has marked its 25 th anniversary year by revealing
huge expansion plans – with an aspiration to launch a second visitor attraction in
Merseyside alongside the redevelopment of Eureka!’s existing site in Halifax.

Since it opened on 9 July 1992, Eureka! Halifax has welcomed more than 7.5 million
visitors through its doors. A completely self-sustainable charity, the museum is now
focused on the next 25 years after announcing future plans to engage and excite even
more children. It’s already one of the north of England’s most popular family attractions.

During the event, Eureka! Chief Executive Leigh-Anne Stradeski revealed how Eureka!
was working with the Liverpool City Region on a project to be located in the Wirral;
backed by Merseytravel and Wirral Council alongside strategic support from the
Liverpool City Region Local Economic Partnership and the Metro Mayor Steve Rotheram.
All are exploring the opportunity of opening a second Eureka! on the site adjacent to
Seacombe Ferry Terminal, currently run by Merseytravel.

The £11 million project could open as early as 2021 if fundraising is successful and the
building will be designed to focus on an older seven to 14-year- old age range; filled with
things to do that develop the technical and digital skills of children and teenagers to
help them meet the demands of a changing 21 st century workforce.

At the dinner, Leigh-Anne also announced plans to extend the existing Halifax site into
the 3600sqm (38,750 sq ft) Great Northern Shed heritage building, which is next door.
The move allows Eureka! Halifax to extend the age range it appeals to while welcoming
an additional 150k to 200k visitors to the museum per year. It is hoped it will open
within six years.
Peter Smart, Eureka! Chairman, said: “Both of these announcements cement a strong
future for Eureka! and, most importantly, an exciting and fun one for our visitors young
and old. We are still in the early stages of both projects but are so pleased to finally be
able to talk about them to start building the momentum for the next 25 years of
Eureka!”

Leigh-Anne Stradeski added: “Eureka! has always had ambitions to extend beyond West
Yorkshire and we have actively been looking for sites for development throughout the
UK. The Wirral site – if it goes ahead – will be funded by grants, donations and
partnerships and we have planned it to concentrate on skills-based learning while
continuing to use play and discovery as a means of engagement.
“We want to create a thriving children’s community of budding scientists and engineers,
actively engaging them to contribute their ideas while learning about real world
problems.

“The Liverpool City Region is already home to big names across maritime,
manufacturing, motoring and energy. We hope these plans for Eureka! Merseyside will
excite people enough to open up opportunities for local children to aspire to work in
jobs within these companies and sectors. This could fill the current skills gap by
capturing their interest in STEM subjects.”

More announcements about the potential second Eureka! will be made in the coming
months but it is hoped it could bring 28 direct full-time posts and 91 jobs indirectly to
the area as well as boost the local economy by £6.2million.

Of the Halifax project, Leigh-Anne said: “We look forward to the new, larger site
contributing to the ongoing regeneration of Halifax town centre while keeping Eureka!
as a key tourist destination for the area. It will allow us more space to bring in
temporary exhibitions, like the recently successful digiPlaySpace, and offer the chance
to extend our offer in new directions with more arts and digital attractions.

“Everyone at Eureka! is so excited for the next part of our journey. After 25 years
welcoming children, parents and grandparents – with many of those adults returning
after visiting as kids themselves – we see the Halifax expansion and the new Merseyside
site as crucial for ensuring Eureka! stays relevant and refreshed for another 25 years.”