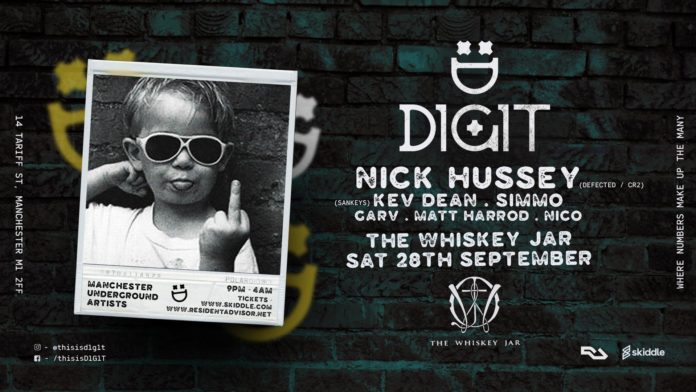 Early bird tickets are now on sale for the debut launch party of new house club night in Manchester, D1G1T.

Matt Harrod, resident DJ and one of D1G1T’s promoters, commented: “As DJs in the 2000s we always wanted to have our own night but were too young and naive to know how to do it – plus we didn’t have the money to take the risk. Now we’ve all grown up, we’re a little more confident.”

As the night evolves each month, D1G1T will showcase some of Manchester’s up-and-coming talent – the first being Simmo, who will be playing on the launch night.

Manchester has a history in house music, with a number of popular club nights starting in the city; from the Hacienda, Holy City Zoo and Manumission, right through to the Warehouse Project, which was established in 2006. But there will be some differences between D1G1T and the Warehouse Project, which is known for bringing some of the biggest names in dance music to the UK city.

Garv, resident DJ and co-promoter, said: “We embrace Manchester’s rich musical culture and even have our tickets booked for Warehouse Project this year. However, we thought that going for a 10,000 capacity warehouse for our first night was stretching it!

“As a newcomer to the scene we are starting small with no particular expectations. We just want to attract a cool crowd and focus on the output – if that grows into something bigger, then great.”

Co-promoter, Nico, added: “We call it D1G1T as we wanted to keep a binary attitude of a club, DJs and a crowd, but the music can be varied depending on the DJ and the crowd on the night. We want DJs who take a chance and know how to connect to the crowd. If that’s their attitude then we want them to be playing at the night.”

The first D1G1T event will run from 9pm until 4am on Saturday 28th September 2019 at The Whiskey Jar, 14 Tariff St, Manchester M1 2FF. Tickets start from £6 and can be purchased on skiddle: https://www.skiddle.com/whats-on/Manchester/The-Whiskey-Jar/D1G1T-Launch-Party/13593277/.