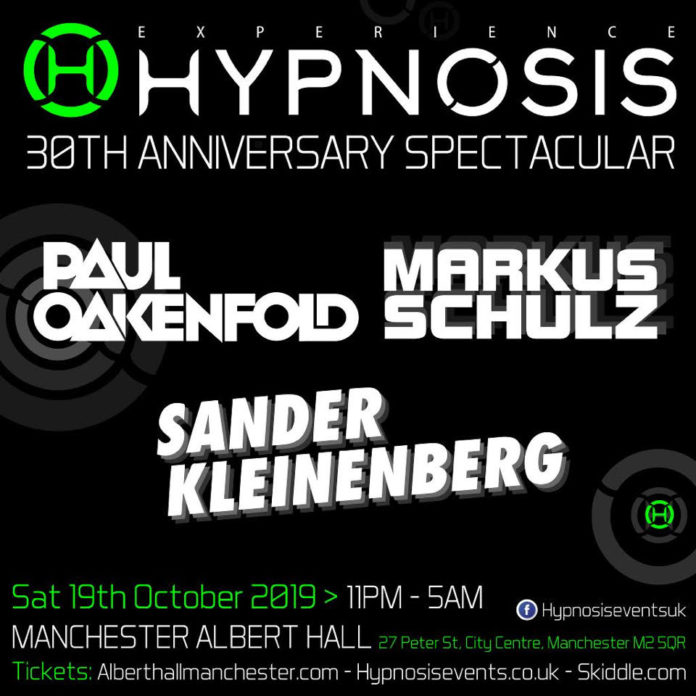 Hypnosis are returning to Manchester with a massive line-up to celebrate their 30th anniversary at Manchester’s Albert Hall.

To host this special party Hypnosis are delighted to bring the legendary Paul Oakenfold, the English record producer and trance DJ who is a three-time Grammy Award and two-time World Music Awards nominee.  Paul has played for Hypnosis on several occasions and become a firm favourite of their crowd, he has elevated and shaped an entire genre and remains one of the leading forces in the global music scene.

Joining Paul will be Markus Schulz, who was voted America’s best DJ in 2012 and 2014 by the DJ Times. Over the past 10 years Markus has fused the individual musical identities of progressive house and trance into his own creative hybrid sound.  He is also the owner of Cold Harbour Recordings.

Finally, to compliment and complete this fantastic line up, there will be Sander Kleinenberg – a Dutch DJ who runs Little Mountain Recordings and another Hypnosis firm favourite – Sander needs no introducing, he has graced the scene for many years and completes this showpiece very nicely.

Originating from the Thunderdome in Manchester in 1989, Hypnosis introduced club culture to Newquay Cornwall where they ran overnight coaches of enthusiastic partygoers who continued to party at their hedonistic nights.

Let’s party like its 1989.  Expect only the best from this very special event.