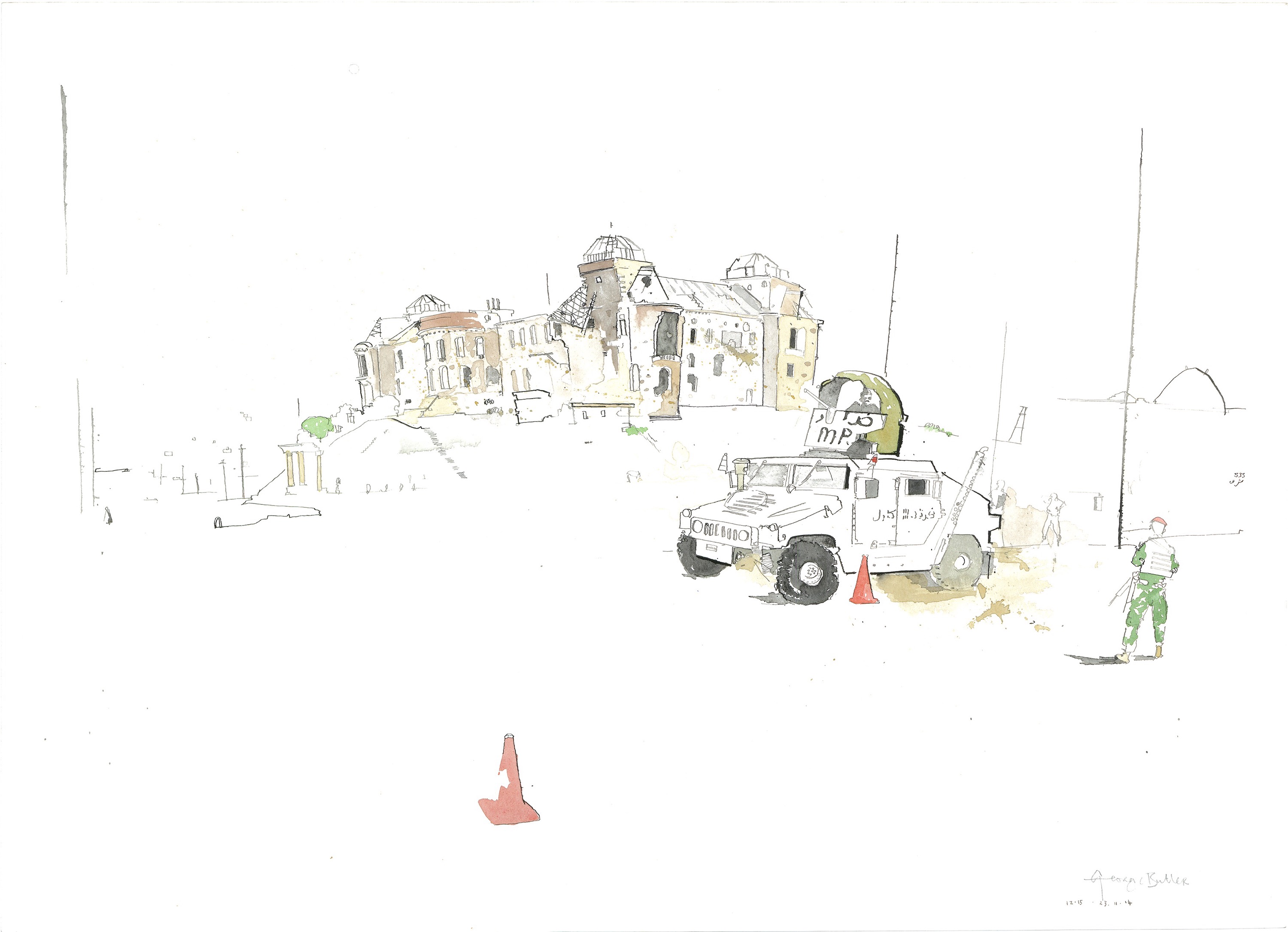 A new display of artworks exploring everyday life in Afghanistan, by British reportage illustrator George Butler, will be unveiled this weekend at the IWM North on Salford Quays.

Documenting ordinary life for civilians in the weeks following the draw back of western combat forces in late 2014, the images depict the events in between the moments that typically make news headlines.

Butler’s art works were drawn live in situ, in locations throughout Afghanistan, in the weeks following the draw back of the combat troops of the International Security Assistance Force, who have been present in the country since 2001.

The images were specially created for this small, powerful display. Butler’s previous work has appeared in news media outlets and exhibitions across the globe.

These new images offer an insight into what happens away from foreign television cameras, at quiet moments in between the events that make news headlines.

Butler’s reportage illustration offers a compelling insight into a country living with conflict, offering an alternative to photography and film media coverage.

More than 20 vivid pen and ink drawings created on the streets of Afghanistan reveal the impact of conflict on people, communities and society.

The political and security situation changed dramatically during Butler’s time there, with daily explosions in both civilian and military areas while, for many, day to day life on the streets and in homes continued almost as normal. 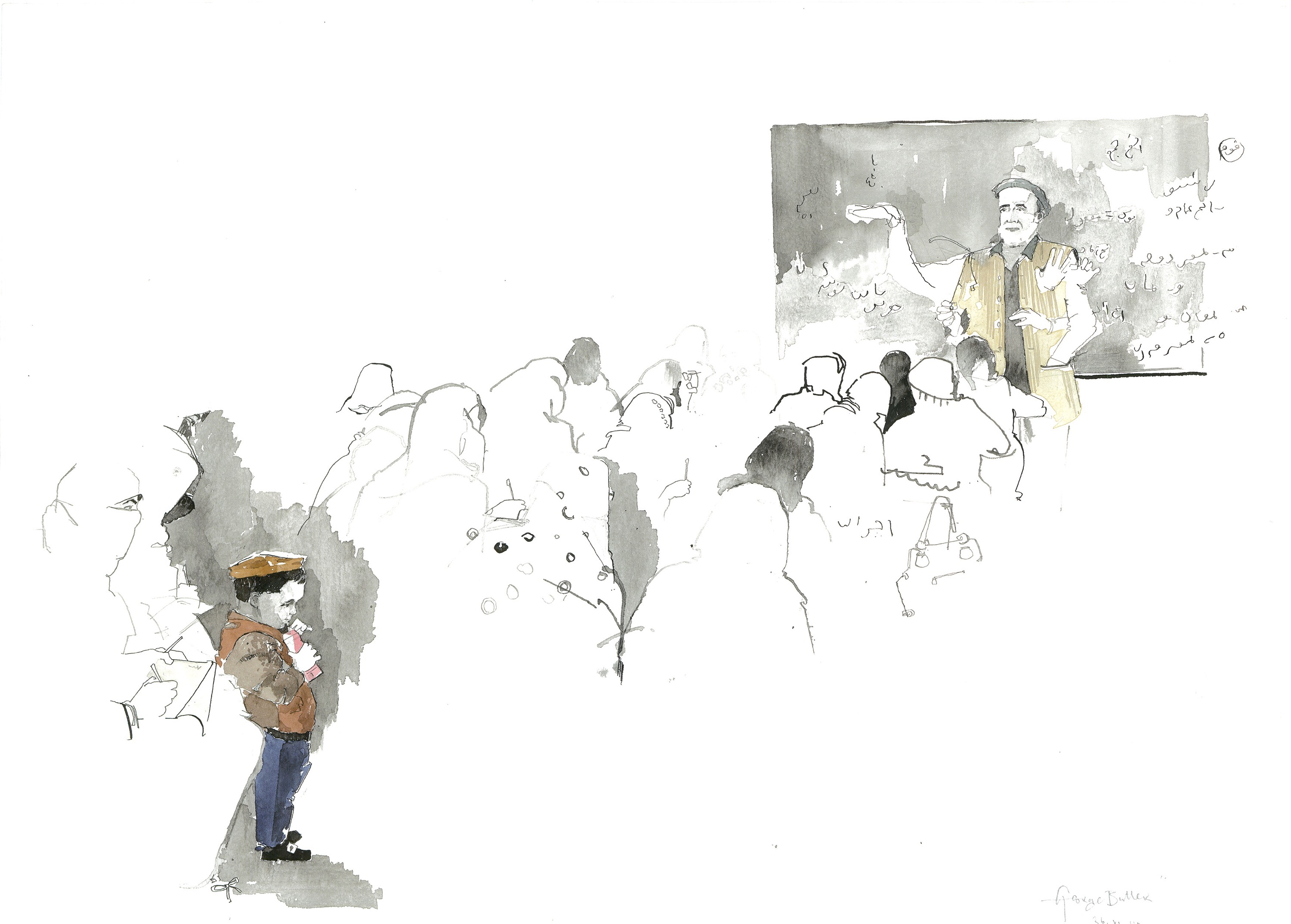 The new artworks are on display alongside film and photography of Butler’s experiences in Afghanistan, revealing the artist at work while standing in dangerous urban locations and remote rural settlements.

George Butler is an artist and illustrator specialising in travel and current affairs. His drawings, done in situ are in pen, ink and watercolour.

In August 2012 George walked from Turkey across the border into Syria, where as an unofficial guest of the rebel Free Syrian Army he spent 4 days drawing the civil war damaged, small and empty town of Azaz. 6 months later he made a similar trip back to Syria (Feb 2013) to record the stories amongst the refugees. These drawings were reproduced by the Times, the Guardian, Evening Standard, Der Spiegel, ARD television Germany, NPR (USA) and reported on the BBC World News, BBC World Service, CNN twice, Al Arabiya and Monocle Radio.

In March 2014 he was commissioned by Doctors of the World to record the living conditions of the Syrian refugees in the Bekaa valley in Lebanon. Again the work was shown on the BBC and in the Guardian before being exhibited at the V&A Museum. An evening that was opened by Richard Rogers and Martin Roth.

However, his sense of adventure did not start here – since leaving Kingston university, drawing has taken George around the world, depicting the oil fields in Azerbaijan, soldiers in Afghanistan, reconstructive plastic surgery, G20 riots, the New York Fire Department, Asian Elephants, murder trials and even an oil rig in the North Sea.

Amongst several other London based solo exhibitions in Dover Street and St.James and several abroad in Norway and Myanmar. He has won the Editorial and Overall award for illustration at the V&A Illustration Awards and an International Media Award in May 2013. His work has been exhibited in the Times Watercolour Competition in 2012 and again in 2014, the Royal Institute of Painters in Watercolours exhibition at the Mall Galleries, 2008, 2009 & 2011, 2013 where he won the June Stokes Roberts Bursary and the Winsor and Newton Young Artist’s Award.