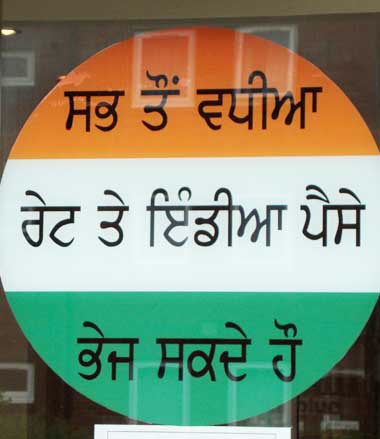 More than 200 languages are spoken in Manchester. Over 50 languages are used regularly in marketing and information signs on the city’s streets, shops, and public buildings, making them an essential part of the city’s local economy and key to the delivery of both public and private services.

LinguaSnapp is The University of Manchester’s very first mobile teaching and research app.

The public will be asked to contribute directly to a study of where the city’s many mother tongues are spoken by uploading photos of the different languages they see to an interactive map, using the free app.

The map will be used to help service providers better understand the needs and skills of Manchester’s dynamic communities and improve equal access to services.

LinguaSnapp will be launched by Professor Dame Nancy Rothwell, President and Vice Chancellor of The University of Manchester, and Councillor Sue Murphy, Deputy Leader of Manchester City Council, tomorrow (TUES).

Professor Rothwell said: “LinguaSnapp is an excellent example of The University’s commitment to social responsibility. It demonstrates how our research can support service provision in the city while making a positive impact in our local communities.”

Councillor Murphy said: “Manchester’s diversity is an asset and a strong part of its identity. The app provides a fantastic opportunity for residents and visitors to find out more about the many languages that they hear and see around the city.”

According to city council statistics, almost 40 per cent of Manchester’s school pupils are multilingual and have a home language other than English.

The app was the idea of the University’s Multilingual Manchester project. Project co-ordinator, Professor Yaron Matras, said: “Language diversity among young people in the city is a precious resource for growth and development. We hope that more detailed information about Manchester’s multilingual hotspots and how they change over time will inform and enrich service provision and economic planning.”

LinguaSnapp is available for free download on the Apple App and Google Play stores from Tuesday, 23 February.

Iconic Totem Pole to return to its rightful place in Salford

Nazir Afzal is The University of Manchester’s new Chancellor