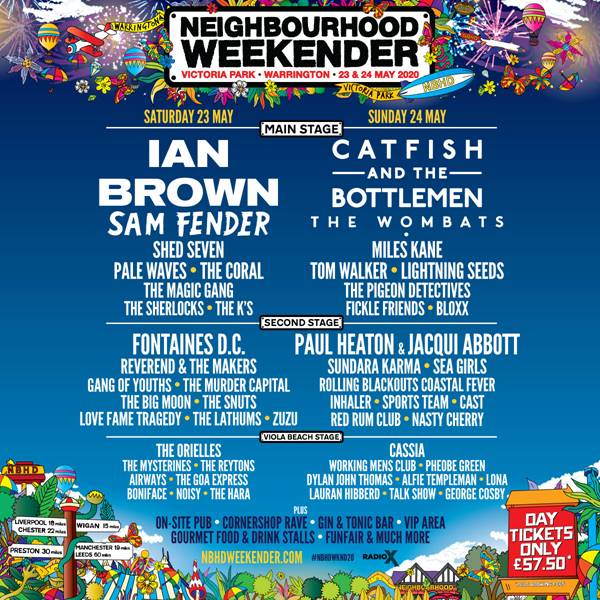 Gang Of Youths, The Snuts, Zuzu, Cast, Nasty Cherry, Lauran Hibberd, The Hara, Cassia, Dylan John Thomas, Lona, Talk Show and Warrington’s own The K’s have been confirmed to join headliners Ian Brown and Catfish And The Bottlemen.

The biggest indie festival in the North West; Neighbourhood Weekender kicks off the festival season by bringing together an incredible bank holiday weekend of live music across three stages, from the biggest acts to the best breaking new bands, alongside a hub of local concessions, and a unique community feel.

Celebrated live artists Cast and Gang Of Youths join the likes of The Wombats, Sam Fender Paul Heaton & Jacqui Abbott, Shed Seven, Miles Kane, The Coral and Tom Walker who will take to stage alongside a host of indie heavyweights, including Sundara Karma, Fontaines D.C. Reverend and the Makers and Pale Waves.

VIP packages are also available which include dedicated entrances and food traders, a VIP Bar, chill out area, posh toilets and a viewing platform to the main stage (subject to capacity).

Tickets for Neighbourhood Weekender, which takes place on 23rd and 24th May this year at Victoria Park, Warrington, are on sale now via Ticketmaster.

An alternative perspective on a serious issue

Spreading a bit of sparkle: Fizz Club expands to Manchester, Didsbury and Altrincham