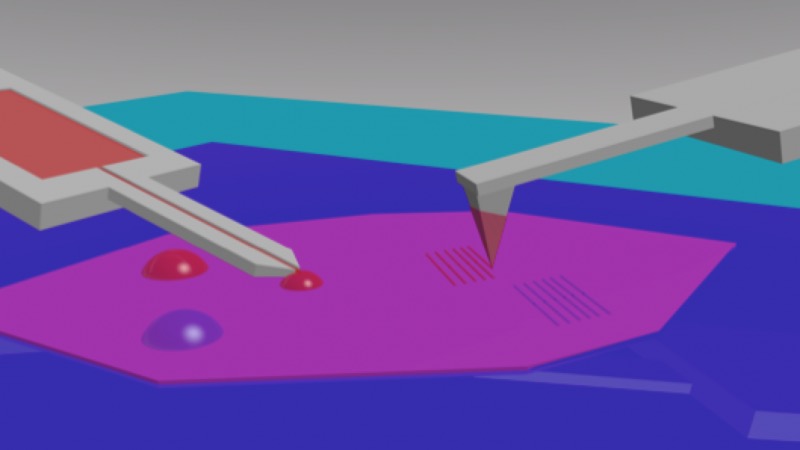 Graphene used as a ‘paper’ on which to ‘write’ chemical patterns thousand times narrower than human hair.
Scientists at The University of Manchester and Karlsruhe Institute of Technology have demonstrated a method to chemically modify small regions of graphene with high precision, leading to extreme miniaturisation of chemical and biological sensors.

Writing in ACS Applied Materials & Interfaces, researchers led by Dr. Aravind Vijayaraghavan have shown that it is possible to combine graphene with chemical and biological molecules and form patterns, which are 100s of nanometres wide.

Graphene is the world’s first two-dimensional material. It is strong, transparent, flexible and the world’s most conductive material. Every atom in graphene is exposed to its environment, allowing it to sense changes in its surroundings.

Using technology that resembles writing with a quill or fountain pen, the scientists were able to deliver chemical droplets to the surface of graphene in very small volumes. In order to achieve such fine chemical patterns, the researchers used droplets of chemicals less than 100 attolitres (10-16 L) in volume; that’s 1/10,000,000,000,000,000th of a litre.

Dr. Vijayaraghavan explains: “Two types of ‘pens’ were used, one which is dipped into the reactive ‘ink’ like a quill to cover the nib, and the other where the ink is filled into a reservoir and flows through a channel in the nib, just like in a fountain pen. An array of such micro-pens are moved over the graphene surface to deliver the chemical droplets which react with the graphene. The first method is known as Dip-Pen Nanolithography (DPN) and the latter is known as Microchannel Cantilever Spotting (µCS).”

Dr. Michael Hirtz, co-investigator from Karlsruhe adds: “By chemically modifying the graphene in such small regions, we can develop chemical and biological sensors which only require very small volumes of fluid to detect various constituents. This, combined with the high sensitivity of graphene sensors, leads us to imagine that in the future we could perform a full blood test on a patient with just one tiny drop of blood, instead of a full syringe.”

From stacking shelves to building with bricks