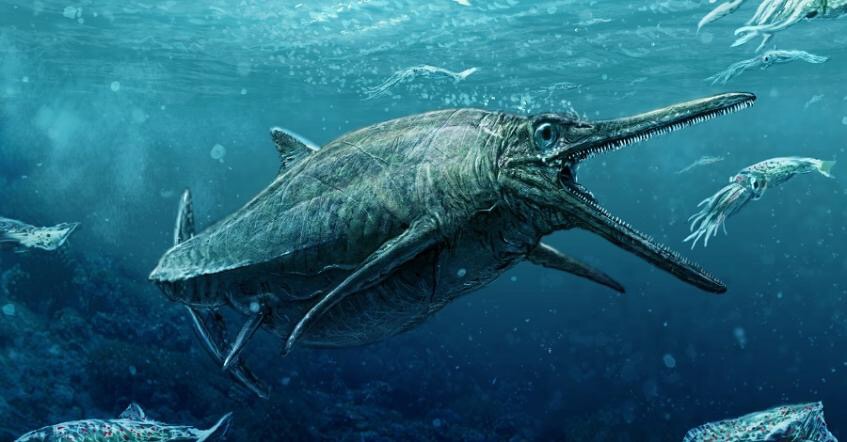 A fierce predator that lived 170 million years ago has been unveiled for the first time, half a century after it was discovered.
The fossilised skeleton of the dolphin-like animal – named the Storr Lochs Monster – was found on the Isle of Skye in 1966. It is the most complete skeleton of a sea-living reptile from the Age of Dinosaurs that has ever been found in Scotland.

The ancient reptile was around four metres in length and had a long, pointed head filled with hundreds of cone-shaped teeth, which it used to feed on fish and squid, researchers say.

A partnership between the Edinburgh University, National Museums Scotland and energy company SSE has enabled the fossil to be extracted from the rock that encased it for millions of years.

The fossil was discovered in 1966 on a beach near the SSE Storr Lochs Power Station by the facility’s manager, Norrie Gillies, who died in 2011 aged 93.

It has been preserved in National Museums Scotland’s storage facility for 50 years and now, by pooling expertise, the new collaboration will enable experts to form a clearer picture of the fossil.

A team of palaeontologists will study the fossil, which belongs to an extinct family of marine reptiles – known as ichthyosaurs. The ancient animals thrived in prehistoric seas at the same time the dinosaurs were ruling the land.

Once analysis of the fossil is complete, the public will have the chance to view the fossil at a number of locations, including SSE’s new visitor centre at Pitlochry Dam, which opens in a few months’ time.

Itchthyosaurs like the Storr Lochs Monster ruled the waves while dinosaurs thundered across the land. Their bones are exceptionally rare in Scotland, which makes this specimen one of the crown jewels of Scottish fossils. It’s all thanks to the keen eye of an amateur collector that this remarkable fossil was ever found in the first place, which goes to show that you don’t need an advanced degree to make huge scientific discoveries.