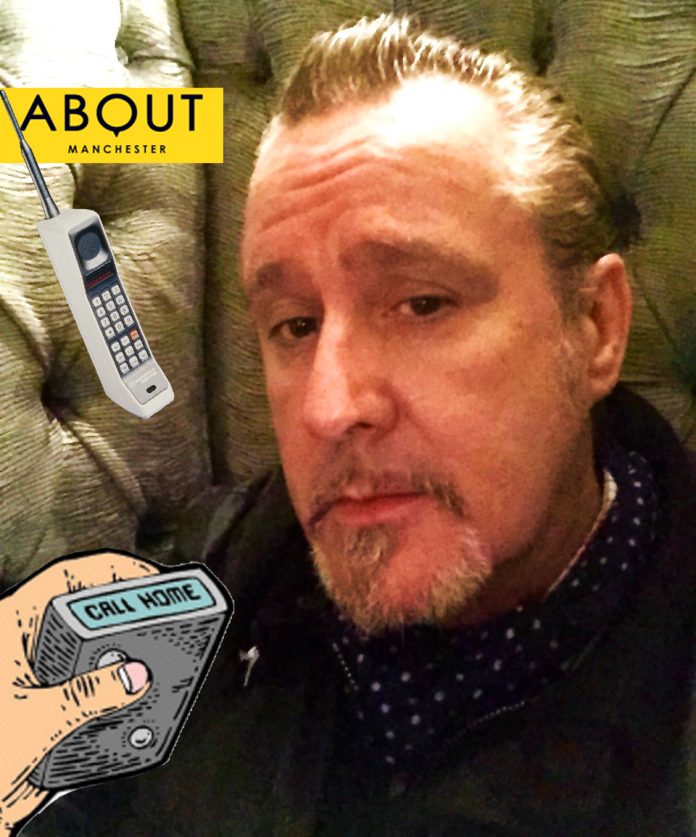 Is my supposed ‘connected’ modern life better than my life, pre-internet?

I often wonder if life is now much better in quality than it was before (arguably the most revolutionary social change of modern times) the internet?

So, I am old enough (and lucky enough), to say I grew up and lived in a world without the internet for over 30 years.

In 1997, I started a degree in multi-media design. Even though the internet had been invented a decade or so earlier, it had hardly been noticed by anyone until the early-to-mid 90’s. So, I had quite happily lived quite a connected and connectable life prior to the internet.

In fact, in romantic retrospect, it was a much less stressful life! I didn’t even have a mobile phone until the late 90’s (out of choice, by the way!) I had a landline and an answer phone, on which I left amusing and seasonal messages for the amusement of my friends and the annoyance of others! I’d return home to enjoy hitting play to listen to the messages I wanted to and hitting ignore on those I just couldn’t be arsed with!

I also had boxes and boxes of vinyl, which I played on solid steel, direct-drive Technics decks, via warm-sounding, valve amplifiers and proper speakers (with wires!)

Alongside my musical paradise sat rows and rows of paper and hardback books, style magazines (including the prerequisite gentleman’s monthlies!) … I was, after all, very young and dumb back then! Graphic novels and comics were often also employed, so I could happily while away an hour or two, flicking through them whilst being out of contact on a train or a bus, or possibly whilst relaxing after work sat at home in bed or on the sofa.

Folks, I must also confess to you that I had a Filofax and a note-book for keeping in touch and for taking memos. Remember them? Yuppies loved those! There was also my trusted Pentax camera with 36mm film or, occasionally, I’d use a disposable camera! I also wrote postcards on holiday to pals and letters to loved ones after Christmas … with a pen!

Our TV’s where not huge, but they were big enough! They came with a choice of five channels, supported by a VHS video player/recorder plus a vast collection of films and iffy videos to peruse at leisure!

I had a PlayStation to enjoy a game over beers and a late night session with mates. There were also the ‘dodgy’ videos I used to slip into the VHS, should the occasion and booze consumed, demand it.

Before digital, I used to design posters with pencils and paper, drawing and using Letraset for quick lettering on makeshift artworks for the gigs and parties I was promoting.

I would then distribute said flyers and posters by hand through doors, into shops – pasting the posters into every available spot where the bobbies couldn’t see me, but the punters could!

It was often a bit labour-intensive, but generally, I enjoyed life without much complaint.

You organised meeting friends in advance – by phone and eventually with a pager.

You could come home, close the door and be out of contact after work, too.

In fact, the work/life balance could only be interrupted by a telephone call, which, if you wanted, you could ignore and just listen to the message – thinking nonchalantly or rebelliously, depending on who or why someone bothered you after work … ‘Sod it … That can wait until tomorrow’.

It worked absolutely, perfectly and practically well, for us all and, most importantly, for me! 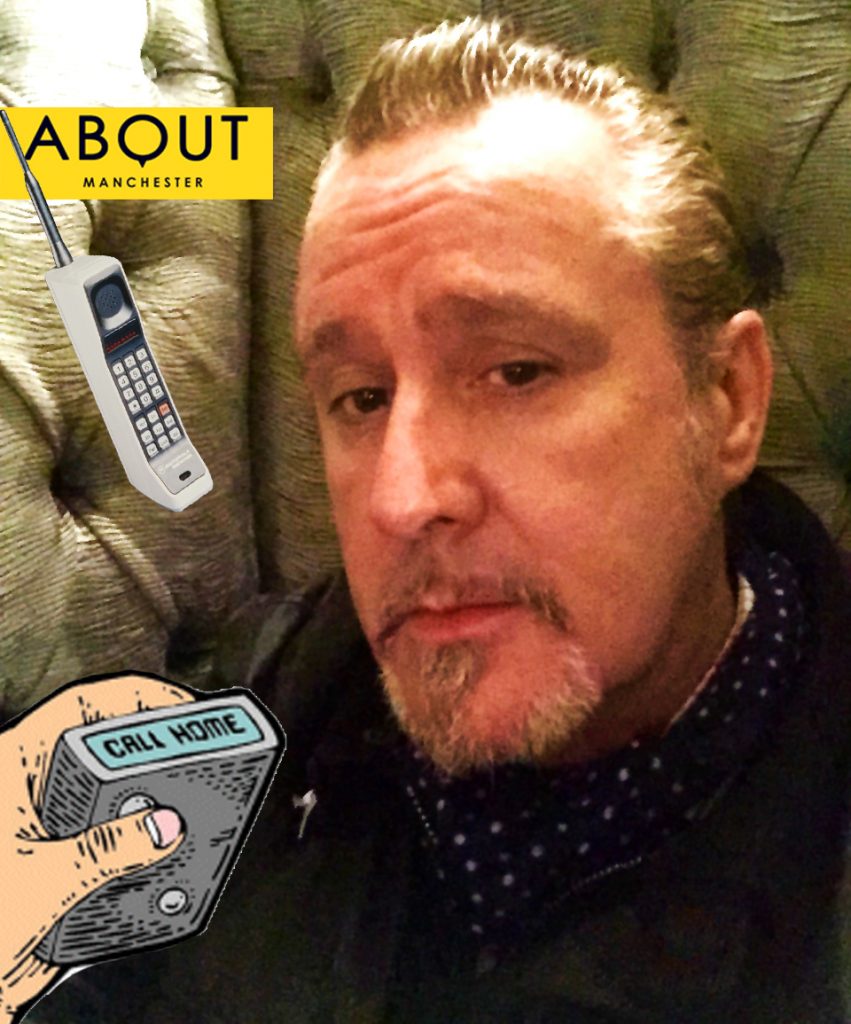 I had hardly used computers until then, to be honest. I did sit with my partner in our production company and band ‘The Sound Foundation’ with the wonderfully talented, intuitive and very patient Dave Hassall. I’d be staring over his shoulders as he twiddled, edited and tweaked the wave forms on his monitor screen in the studio and played the keyboards like a wizard. I would say helpful things like ‘Can’t you make those rising strings a bit more … golden sounding?’ He loved that.

He would look at me with disdain and twiddle the gold sounding button and ‘voila!’ … the strings would magically sound like angels’ harps! My duties were lyrics, melodies, finding tiny samples for the tiny amount of memory our equipment could copy, making tea and rolling spliffs … I wasn’t bad at spliffs, as it happened. My brews are also legendary!

Then I gave up trying (half-successfully) to be a ‘pop star DJ producer’ in September 1997. I went to Wrexham Art College, part of NEWI University to study Multimedia Design.

It was here the modern world began … I got my first e-mail address and realised how a mouse worked.

The future began right there, whether I liked it or not!

It was a slow burn at first. E-mails were the beginning. Checking every morning, noon and night for everything from college courses, to dancing baby videos sent by equally amusing mates on my bright, shiny, first generation iMac.

Then followed the crumble of the privacy wall … My first mobile phone. Now, I was constantly contactable and could also send texts, if I could be bothered … I soon was!

My thumb danced around the keyboard like a limping, overweight ballet dancer within weeks -sending amusing anecdotes to not that interested individuals who sent me exclamations and kisses back with wild abandon.

The e-mails got busier and spammier as my address got noticed by ominous sounding ‘bots’ and my computer almost got a virus off a nasty sounding Trojan.

My eyesight seemed to be fading and my back began giving me gyp too.

Was it old age encroaching. Or was it huddling too closely to my new laptop screen whilst watching telly and typing late into the night?

Suddenly I was designing websites, drawing and designing without pen or paper and working with all manner of jpegs, GIFs and PDF’s.

The world had changed and bloody quickly!

Everything was instant and needed immediately. I was caught in the eye of the technological whirlwind, like a gulping goldfish in the spinning water of a freshly-cleaned bowl.

The world was now spinning faster … and I was spinning with it!

Yahoo, MySpace, Facebook, Twitter, Apple, Microsoft all words that in the early 90’s meant bugger all to me, were now everything and everywhere!

Life has become so intertwined and involved, always on and never off. Contactable constantly, photographed permanently, described, discussed and displayed by everyone for everyone and privacy became passé.

Is life better?
Is life worse?

I do really enjoy the easy contact with the world and with old and new friends – through the immediacy of social media, though.

I do get a horrible feeling of not being able to get off the roller coaster ride of everyone, everywhere knowing what I’m up to . But it’s my choice, though, isn’t it?

Are we trapped? Are we addicted and used to the constant input and streaming information?

Can we now ever truly turn off?

Would we want to?

I try, and I fail regularly … I am an input junkie … I find it a bit weird to not have that always-on access to the universe at my fingertips when I stupidly let my mobile battery die.

I used to hate being always available … The idea was abhorrent to me, back in the early 90’s. I would happily be out of contact and free from the crowd.

I now accept I’ve been assimilated.

I am addicted to our modern life.

I think, you are probably too.

I wonder what colour my first neural chip will be?

See you on the next big upload, kids!