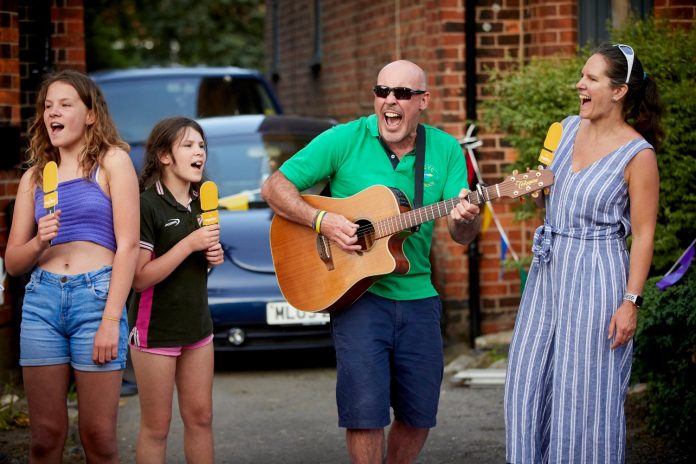 Thousands of residents from across the city-region threw open their windows and took to their doorsteps and balconies to join Together in One Voice, a joyous mass singalong on Thursday 28 May at 7.30pm, supported by a host of top musical talent.

The singalong was accompanied by a specially-arranged soundtrack, streamed on the night for people to join in with via MIF LIVE (Manchester International Festival’s online channel), featuring performances by virtual choirs and musicians from across the city region, which had been specially recorded during lockdown.

Liam Gallagher, Mark Owen of Take That, James’ Tim Booth, Emeli Sande, Mike Pickering from M People, Tom Walker, Denise Johnson, Liam Fray from The Courteeners and Aitch, all appeared on screen on the night, via the live-stream, to introduce the public’s renditions of their songs.

Kicking off the introductions ahead of the opening song, Take That’s Shine, Mark Owen said: “We’re made up to have one of our songs chosen to be the opening song for the evening, the beginning of the party….so Manchester, Greater Manchester, it is time Together in One Voice for you to Shine!”

The playlist of hits – which was also broadcast live on BBC Radio Manchester – continued with Martha and the Vandellas’ Dancing In The Streets, Emeli Sande’sYou Are Not Alone, Tom Walker’s Leave A Light On, James’ Sit Down, and M People’s Search for The Hero.

Following an intermission for what may have been the final Clap for Carers, the set list finished up with crowd-pleaser Wonderwall by Oasis, introduced by Liam Gallagher with the words: “Hello Manchester, I hear you’re having a bit of a singalong tonight. Well I’m here to introduce the mother of all singalongs, the one and only Wonderwall. Turn it up!”

A host of other stars also delivered a series of messages of support ahead of the singing including: Coronation Street actors Jennie McAlpine, Simon Gregson and Julia Goulding, DJ and musician Clint Boon, Rowetta and Shaun Ryder from the Happy Mondays, Mani from the Stone Roses, bands including Blossoms and The Lottery Winners and artists including Jenna G, Slay, Evabee and Oneda, and Manchester City footballer Phil Foden.

The doorstep singalong was captured on the night with drones, street cameras and footage from residents for an extended broadcast featuring interviews with artists and participants which will be broadcast on Sunday 31 May, 6pm exclusively on MIF Live.