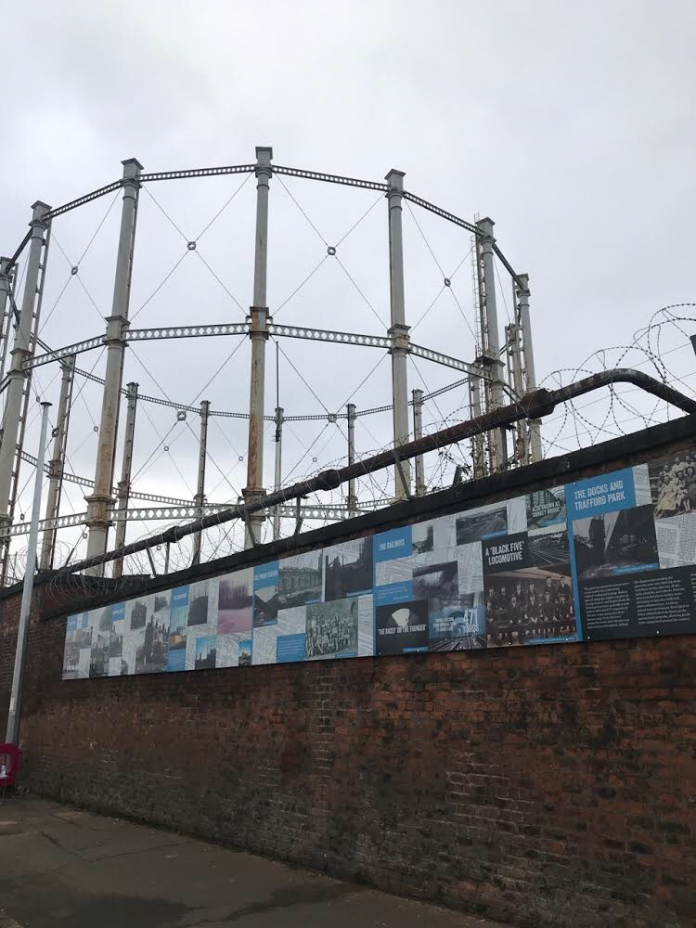 A mural depicting Salford’s famed industrial heritage has been unveiled at the site of the Gasholders on West Egerton Street in Salford.

Members of the community gathered at the site to see the unveiling and enjoyed a close-up view of the site before the works are finished in the coming months.

The mural, created by the Ordsall and Langworthy Community Arts Group and commissioned by National Grid Property, shows the role the gasholders played in the city’s thriving industrial past.

The gasholder wall was made famous in singer Ewan MacColl’s 1949 song “Dirty Old Town” which starts with the lyrics, “I met my love by the gas works croft”. However, improvements in technology mean gas holders are no longer needed and National Grid has been dismantling the structure so the whole site can be brought back into beneficial use.

“This site holds a special place for many people in Salford and we wanted to do something to commemorate the site and what it meant to the City of Salford all these years. The mural represents not just the site’s history but the whole community which is still as strong as ever, as today’s turnout shows.”

“The structures at Liverpool Street in Salford haven’t stored gas for several years and we’ve been working over the last few months to take down the gasholders. We hope people enjoy this little memento to the City’s great history and we are delighted to have had the opportunity to work with the local community to make sure we leave a positive, lasting legacy in Salford.”

The mural unveiling was attended by members of the Ordsall & Langworthy Neighbourhood Forum, Salford Lads Club and representatives from Salford Council.

“I’ve lived in the area my whole life and we have seen a lot of exciting change. However, it’s really important that we remember our industrial past. I hope this mural will remind people to never lose sight of our proud history.

I’d also like to thank National Grid for giving me and the community a chance to leave a legacy at the site by commissioning this piece.”

Ministers knew that HS2 could go well over budget