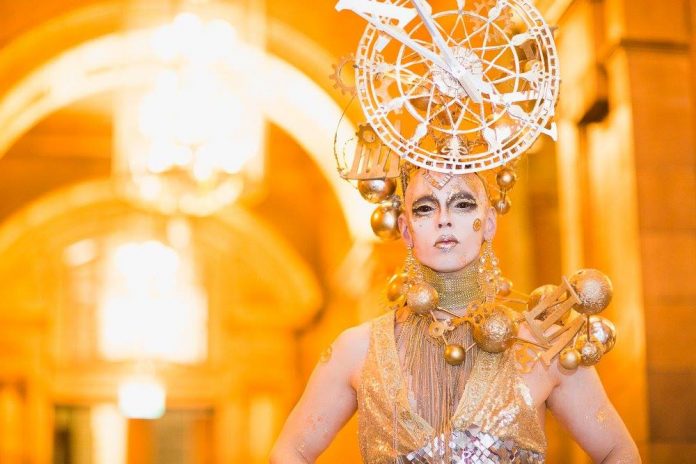 Presented by a top bill of artists from the North West and beyond, Mother’s Ruinfuses warmth with wild hilarity to bring a Queer variety night of comedy, music, drag and the unpredictable like no other.

Cheddar Gorgeous is Manchester’s hottest drag, boylesque artist. He hosts Manchester’s monthly Cha Cha Boudoir, and is the namesake of the Family Gorgeous. When not dressed as a queen, king, cat, unicorn or any number of other assorted creations he spends his time writing and drawing in anthropology. Cheddar presents the visually impressive Queen Elizabeth piece he has recently been touring in America.

Channeling her inner clown Debs Gatenby will be bringing bad impersonations of animal spirit guides and meditations on homo-normativity in modern life. Debs is the current holder of the Bunny of Hope award for her services to ‘day jobs’ and loves spending time on her sofa.  She has had two midlife crises so you will be in safe hands.

Diva Hollywood, the wild woman of cabaret brings you her fierce, sexy and very funny tiger woman.  Diva is the UK’s only talking female whip cracking cabaret performer.  Expect fun and games where no one is safe from her double whip cracking skills and love of dark satire.  Diva made her debut in the famous Slipper Room in New York in 2005, she has since gone on to grace stages all over the UK and internationally.

Jonathan Mayor dresses like a butterfly and stings like a scorpion- the forgotten Bollywood love-child of Hinge and Bracket, Kenneth Williams and Eddie Izzard, Mayor is currently Sarah Millican’s go-to host and support act.  Described as “Very funny” by Michael Palin and “Marvelously wicked” by Sarah Millican.

Fat Roland is a stand-up spoken word artist and litterbug catoonist who has been likened to ‘Jonny Vegas devouring Sam Simmons…on a rollacoater, driven by a depressed buffalo. He is champion of Literary Death Match Manchester and co-runs Bad Language, voted the UK’s best spoken word night two years in a row.

Donal Sarsfield primarily records, transforms and organises sound. He’s a little bit Rufus, a little bit Schubert, a little bit Bernard Parmegiani. Fresh from his performance at Mother’s Bloomers at Royal Exchange, Manchester he is here tonight to compete with everyone for the better oxygen in the room.

House Of Decay, Manchester’s premier vogue house is a group of dancers/creatives/stylist/drag artists focusing on Vogue/Dance/Style/fashion and Drag. Then have recently been on the Rupaul Comedy of Queen’s tour, worked with Hercules and The Love Affair and opened the main stage of Manchester Pride. The Mothers of the House are Joshua Hubbard and Grace Oni Smith.

The Sunday Boys are Manchester’s male voice sensation, an unauditioned, inclusive male voice choir with a majority gay identifying membership that rehearse on Sunday evenings in central Manchester. Over the past year the choir has performed at prestigious gigs in the city and beyond representing Manchester’s LGBT+ arts scene (Superbia launch) – Manchester Pride, the city’s community singer (Singing in the City at the Royal Exchange) and worked with leading poets (Volumes with Ian and Andrew McMillan at Rochdale Literature & Ideas Festival) and composers (Cake by Phil Venables at 50 Years of Change).

Bread and Roses at Oldham Coliseum