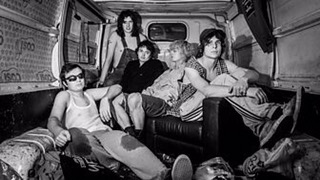 With songs about North Korea and Donald Trump, Cabbage would run the risk of being pigeon-holed as a political band… if it wasn’t for their filthy sense of humour.

Now the Mossley based band have been nominated for the BBC’s Sound of 2017 longlist.

The list was compiled using tips from a panel of 170 DJs, critics and writers.

It aims to highlight 15 of the most promising rising musical acts for the coming year and Cabbage are in good company with Adele, 50 Cent, Ellie Goulding and Sam Smith among the previous winners.

“We think it’s such a waste that bands have a platform to say things and just don’t” says Martin, whose poetry is inspired by “the bard of Salford”, John Cooper Clark.

BBC Radio 1 DJ’s Huw Stephens and MistaJam will announce the top five acts, counting down to the winner, live on Clara Amfo’s show each day. The top five acts will be announced each morning from 2nd January and simultaneously on the BBC News website and BBC Music Sound Of 2017 website.

BBC Radio 1, 1Xtra, 2 and 6 Music are in a unique position to be able to do more than other stations to discover and provide a national platform for new talent, and have supported many of the acts in this year’s list. This is through initiatives such as BBC Introducing shows, festivals and live sessions as well as inclusion on their varied playlists.

Chris Price, Head of Music, BBC Radio 1 and 1Xtra, says: “The BBC Music Sound Of panel, always the broadest and most objective list of new music tastemakers assembled each year – which now includes international voices too – has delivered yet another exciting and diverse list of new and emerging talent to look out for next year. These are the names that will capture the imagination of music lovers the world over in 2017, and I’m delighted to say that every single one has already received significant support on Radio 1 and 1Xtra, both in evening and daytime shows. They join former winners – and now household names – such as Adele, Ellie Goulding, Sam Smith and Years & Years, continuing Radio 1 and 1Xtra’s commitment to discovering and breaking new talent on the global stage. Judging by the crop of talent on this year’s long list, there’s no shortage of future stars to choose from.”

Bob Shennan, Director of BBC Music and Radio says: “The BBC’s commitment to developing new talent goes to the very heart of our public service purpose. BBC Music Sound Of, as well as BBC Introducing, are increasingly important ways that music lovers can make sure they are immediately across the musical superstars of the future.”

MistaJam, BBC Radio DJ says: “The BBC Music Sound of 2017 longlist shows that next year is already shaping up to be a big one filled with amazing music from homegrown talent that are already being supported across Radio 1 and 1Xtra. From the driving rock of The Amazons to Dave’s 18-year-old inner city street tales via Maggie Rogers’ Folk meets Electronic soundscapes; the list shows the breadth and quality of what we can all expect next year.”

Work begins on the Metrolink line to Trafford Centre