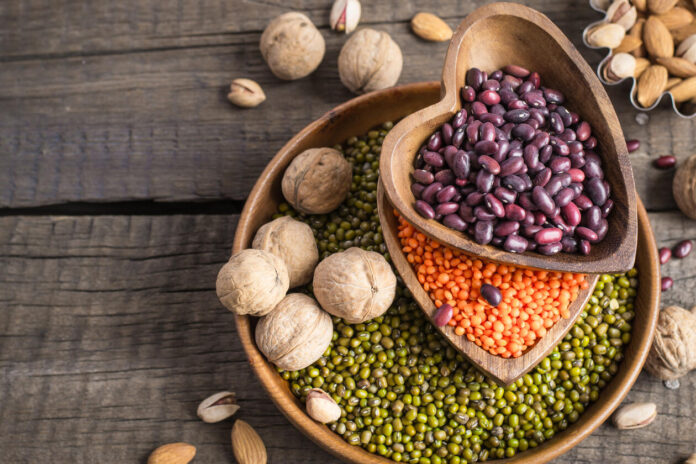 A diet of eating nuts, pulses and grains could see a person look forward to ten additional lifespan years according to scientists

A study published in PLOS Medicine from researchers at University of Bergen estimates that life expectancy can increase by up to ten years through diet modifications and they add that unhealthy eating is associated with 11 million deaths and 255 million life-years annually.

The researchers have developed a calculator where you could estimate how many life years you could gain by modifications in diet patterns. Professor Lars T. Fadnes at the Department of Global Health and Primary Care, UiB, explains:

“For example, an average 40-year-old woman from the United States or Europe who has eaten a typical Western diet, is likely to gain around ten years if optimizing diet from that age. Even a quite feasible diet modification is estimated to translate into gains of around six life years”.

The study shows that some food groups are more strongly associated with life expectancy than others – positively or negatively:

“The largest health gains are estimated from eating more legumes, whole grains and nuts, and less red and processed meat. Further gains are also associated with increasing the intake of fruits and vegetables, and fish, while reducing the intake of sugar-sweetened drinks, eggs, and refined grains”” Fadnes explains.

Fadnes is the leader of the project that is called Food4HealthyLife project. He adds that:

“Research until now have shown health benefits associated with separate food group or specific diet patterns but given limited information on the health impact of other diet changes. Our modeling methodology has bridged this gap. The methodology provides population estimates under given assumptions and is not meant as individualized forecasting. There are uncertainties related to the health effect of eggs, white meat, and added oils, individual variation in protective and risk factors, and time to achieve full effects. Future, future development of medical treatments; and changes in lifestyle are also not taken into consideration.”

If the diet changes are initiated in later ages, the gains are smaller but still substantial – even among people in their seventies. Even quite feasible diet changes are associated with increased life expectancy by seven percent or more for both sexes across age groups.

“The Food4HealthyLife calculator enables instant estimation of the effect on life expectancy of a range of dietary changes and could be a useful tool in for both clinicians, policy makers, and the general population”, says Fadnes.