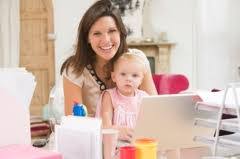 Against a backdrop of government initiatives to help working families, such as shared parental leave and improved childcare provision, the British Social Attitudes Survey reveals that the proportion of people who think women should stay at home with their children has stayed the same since 2012.

The National Centre for Social Research questioned people about whether a mother should stay at home with her family and found that 33% of Brits think mothers of pre-school age children should stay at home, a figure that remains unchanged over the last five years.

This comes alongside a continued shift away from a traditional view of women as homemakers, and men as breadwinners.

30% think the leave should be evenly split between parents. Only 15% think the mother should take all of the leave and the father none.

Men are more likely than women to think mothers should take the entire leave period- 19% against 11%. Young people aged 18 to 34 are more likely to think leave should be evenly split- 38% compared with 17% of the oldest group aged 75 plus.

For the first time, this year’s BSA survey assessed views on comments being made about a woman’s appearance in the street, namely commenting loudly that she “looks gorgeous today”.

57% of Brits think it is always or usually wrong for a man to make this comment, a view that is more common among men (61%) than women (52%). 45% say it is wrong for women to comment in the same way on a man’s appearance.

Deputy chief executive Nancy Kelley said: “The people of Britain are moving away from the idea that men should be breadwinners and women homemakers.
“Yet when we asked people if they thought mothers of pre-school age children should work we found no increase in support in recent years, against a backdrop of several policy changes aiming to help working families manage work and childcare.

“People are supportive of parental leave being shared between men and women but in practice very few actually do. This suggests that government must look beyond the law if they are hoping to balance raising a child between mums and dads.”