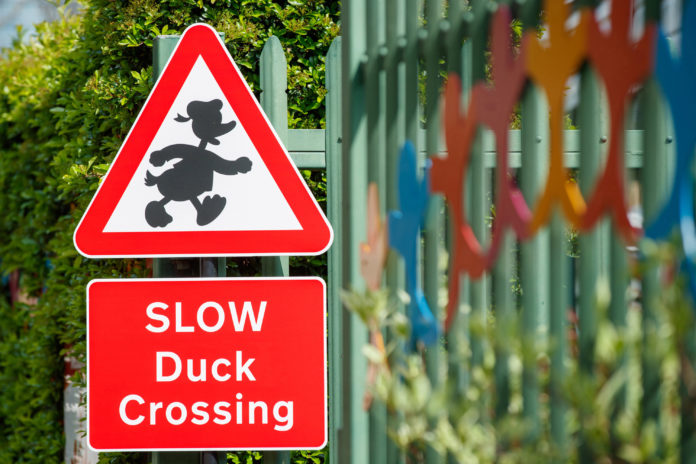 Design icon Calvert, who is behind the official signage on all British roads, has turned her pen to using characters from Disney Junior’s hit preschool TV show Mickey and the Roadster Racers to launch its campaign to help parents and teachers educate kids on vital rules of the road from a young age. The special signs are being released to inspire schools and nurseries to make their own road safety messages that call on adults to drive safely and are available to download on the Brake website.

The signs are being released alongside new road safety guides that are being distributed to nurseries, schools and parents nationwide as part of Disney Junior UK’s ongoing Parenting Hacks initiative. The interactive guides, which feature six of the beloved characters, aim to help teach 2–7-year-olds about the basics of road safety and are available to download for free through the Brake website (brakezebras.org).

Two in three parents (64 per cent) say they feel a lack of control when their child is on their scooter, yet two in five (42 per cent) say they often let them scoot off in front on the way to school or nursery. Almost every parent questioned (87 per cent) said they want their children to have a better understanding of road safety from a young age.

The research also found that It is not just kids who need to get clued up on road safety, with only half of parents (53 per cent) able to correctly identify a pelican crossing. Almost half of drivers (48 per cent) do not know the speed limit around nearby schools, with an alarming 83 per cent of drivers unable to identify the meaning of a selection of common road signs in the Highway Code.

The campaign aims to raise awareness of the importance of drivers going slow around schools, and the special signs feature important ‘hacks’ to help parents teach their kids like holding hands and walking not running. As well as the signs and guides to help make kids more road-safe, Disney Junior UK has also released a new Parenting Hacks podcast to help parents educate their children on the importance of road safety featuring presenter and mum-of-two Helen Skelton, parenting expert Sue Atkins and Dave Nichols, Community Engagement Manager at Brake.

Margaret Calvert OBE said: “The Mickey and the Roadster Racers inspired designs are a fun take on my original ‘children crossing’ signs, which I hope will help teach young children important lessons of the road. It was an enjoyable challenge collaborating with Disney Junior and Brake on an important subject, and by using such recognisable characters I hope they help to capture the attention of children, and parents too.”

Dave Nichols, Community Engagement Manager, Brake comments: “Our vision is a world where all children can enjoy safe and healthy journeys, which is why we’re always working to improve the safety and welfare of children on UK roads. Teaming up with Disney Junior and Mickey and the Roadster Racers is a fantastic way to help young children and those who care for them raise awareness about being safe on our roads. Having the support of Britain’s official road sign designer is a powerful way to have these iconic characters give children a voice and call on grown-ups to drive safely.”

Record numbers of passengers take to the skies from Manchester