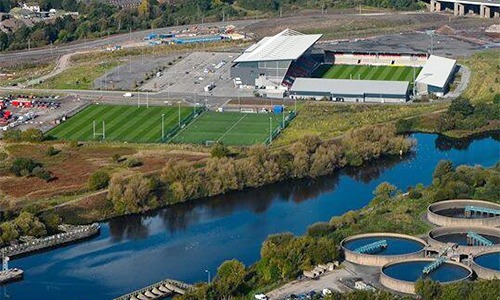 A further 14.6 acres of land around the AJ Bell Stadium in Salford is to be sold to make way for the development of warehouses and combined office space, totalling 275,000 ft.

The land is currently in the ownership of CosCoS, (The City of Salford Stadium Community Stadium Limited), which is a partnership between Salford City Council and Peel L&P, and terms have been agreed to sell the site to an experienced developer in the logistics sector.

Subject to planning, work on the new units could start by the end of the year and create around 350 new jobs. The planning team will consider issues such as infrastructure, accessibility, public transport and green space as part of the process.

The sale follows land bought by Greene King and Aldi with a number of other potential sales being discussed on the remaining 25 acres of development land.

The news indicates the strong market interest in the location and will, when all sales are completed, deliver investment in excess of £100 million, an estimated 800 jobs and business rates income each year of around £2million.

Salford City Mayor Paul Dennett said: “It is fantastic that CosCos are selling further land around the AJ Bell Stadium. There is strong interest in the remaining development plots and we are confident that the City Council will fully recover its investment in the project when all are bought.

“What was once derelict land is now a catalyst for jobs, growth and investment in our city.

“The development of the land around the stadium is more critical than ever as we start to plan our recovery from the economic challenges of the COVID-19 pandemic.”

Dispersal orders in place as police respond to reports of illegal rave at Audenshaw...

Is the K number the new R number? What you need to know