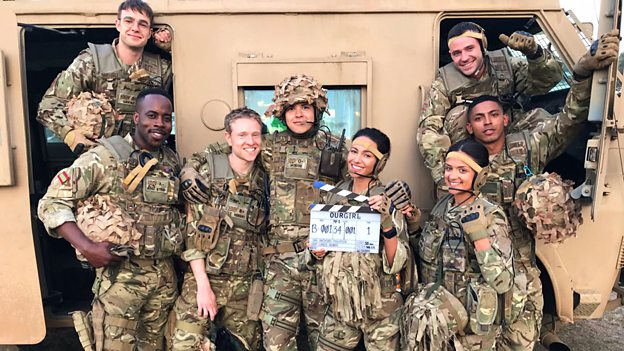 Michelle Keegan returned to South Africa this week to begin filming the fourth series of Tony Ground’s hit BBC One series, Our Girl.

Made by BBC Studios, the latest six-part series will be set in Afghanistan, one year on from 2 Section’s last tour in Bangladesh.

Favourites returning to duty in Afghanistan for series four include Rolan Bell as Kingy, Ben Batt as Blue, Mark Armstrong as Spanner, Jack Parry-Jones as Jackson, Sean Ward as Fingers and Sean Sagar as Monk and Dominic Jephcott makes a return as the new Brigadier. Back home in Manchester, Angela Lonsdale and Sean Gilder return as Georgie’s parents, Joan Kempson as her Nan and Linzey Cocker as her sister, Marie.

Michelle says: “It is such a joy to reprise the role of Georgie Lane and this season we return to Afghanistan where the British Army retains a presence training Afghan National Army personnel. With some of the most incredible and explosive scripts I’ve ever read, this six-part story will rip the heart out of our loyal fan base and new viewers alike.”

In series four, we meet a positive Georgie who is making leaps in her career, having been promoted to Sergeant, and now training a new bunch of medics. Happily living back in Manchester with her family, Georgie is insistent to her friends in 2 Section that she’s happily settled in her new job and will not be joining them on their upcoming deployment to Afghanistan, no matter how much they want her to.

However, when a night on the town results in a near-fatal incident, she can’t deny that the painful memories of losing the love of her life, Elvis, to a Taliban attack, is the real reason she doesn’t want to go back. Georgie realises that she needs to return to Afghanistan to face her own fears.

Tony Grounds, writer and creator, says: “Fantastic to be with 2 Section once again as they head back to Afghanistan to assist with the training and mentoring of the Afghan National Army. Into our platoon we have enlisted some of the most talented young actors of the next generation. Michelle Keegan’s Sergeant Georgie Lane is an inspiration to all and it is a delight and honour to work with such a troupe.”

Hilary Salmon, Executive Producer for BBC Studios, says: “For series four of Our Girl some brilliantly drawn new characters have joined 2 Section and are getting used to the discipline, camaraderie and heart-ache of army life for the first time. Actors Nico Mirallegro, Amy-Leigh Hickman, Kaine Zajaz and Will Attenborough have successfully completed boot camp and are looking forward to the rigours of filming.