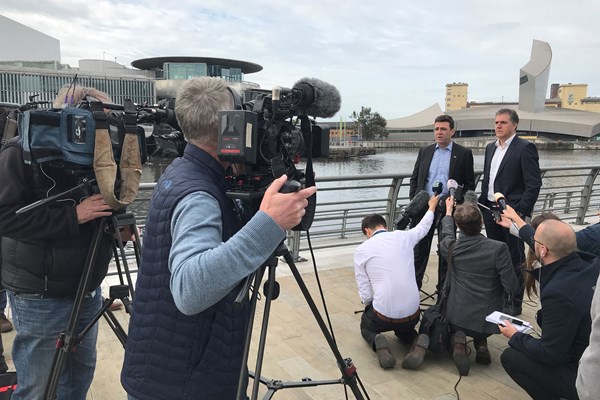 The Mayors of Greater Manchester and Liverpool City Region have called on the Transport Secretary to terminate Northern’s rail franchise as soon as possible.

Speaking on behalf of the 4.3m people they represent, Mayors Andy Burnham and Steve Rotheram made the call 12 months on from last May’s rail timetable chaos.

The Mayors believe Northern has consistently failed to show they are able to take the action required to restore public confidence or deliver their legally-binding franchise requirements.

They say that numerous problems are still inflicting the network citing the failure to deliver a significant and sustained improvement in performance – with nearly a fifth of all services arriving late, 28,000 services cancelled, and a huge increase in services being “shortformed” (ie reducing the number of carriages on the train) from 2,825 in December 2018 to 4,172 in April 2019

The Company, say the Mayor’s failed to resolve the RMT industrial dispute – which has seen 46 days of strike action

They also claim the hated Pacer trains may not be gone by the end of the year as promised and that Northern have yet to deliver new services – such as a range of promised additional hourly services in much-needed parts of the network.

They are now urging the Department of Transport to implement an ‘Operator of Last Resort’ and bring in a new board and team of directors to run the company as soon possible.

The Department of Transport has a legal duty to provide an Operator of Last Resort to ensure continuity of passenger services, in the event of a franchise failure. The Mayors have called for a commitment from the Government to provide resources to ensure all existing franchise commitments are delivered, including the introduction of new rolling stock, in the event of an Operator of Last Resort being appointed.

Making the call on Wednesday 29 May, the Mayors emphasised the rights of Northern staff must be protected under these new arrangements. Both Andy Burnham and Steve Rotherham were clear that Northern staff have had to work under difficult circumstances and have shown dedication and professionalism despite management failings over the last twelve months.

Mayor of Greater Manchester, Andy Burnham said: “We have been extremely patient with Northern but enough is enough. They promised us that things would be significantly better by May 2019 and that hasn’t happened. Train services across Greater Manchester and the North West remain unreliable and over-crowded. Sunday services are still subject to widespread cancellation and promises of new rolling stock have not been kept.

“The people of Greater Manchester deserve much better than this. That’s why, together with the Mayor of Liverpool City Region, I am calling on the Transport Secretary to strip Arriva Rail North of this franchise and stabilise the franchise under the control of the Government. It is only through taking this action that we can restore the trust of the public and deliver a rail network that finally works for its passengers.

“We wish to make clear that we do not blame the staff of Northern who have worked hard over the last year in very difficult circumstances. We believe they, and the travelling public, have been let down by Northern’s management who have had plenty of opportunity to show how they will meet franchise requirements but have failed to do so.”