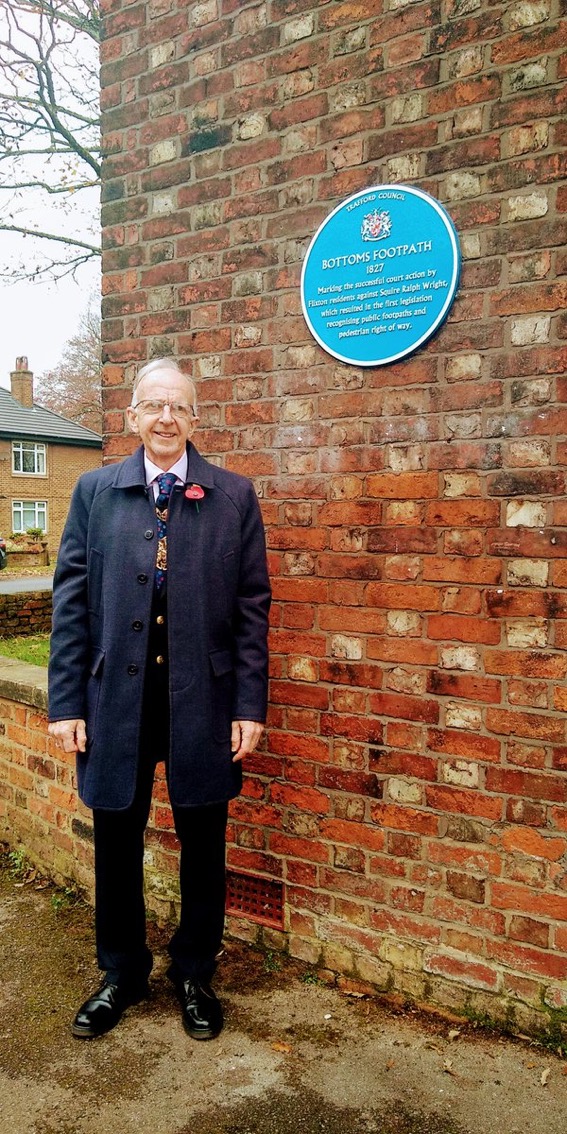 A blue plaque has been officially unveiled to celebrate an historic victory for rights of way campaigners in Trafford.

The Mayor of Trafford, Cllr Laurence Walsh, unveiled the plaque at Trafford Council’s Flixton House to commemorate the Flixton residents who stopped Squire Ralph Wright from closing Bottoms Footpath in 1827.

Residents gathered to watch the unveiling of the plaque and radio presenter Stuart Maconie, who is the President of the Ramblers Association and a rights of way campaigner himself, sent a video message to mark the occasion.

The Bottoms Footpath case marked the culmination of several years of campaigning by villagers opposed to local magistrate and land owner Mr Wright’s decision to block up footpaths across his land. In 1826, the ‘Flixton Footpath Battle’ resulted in the formation of the ‘Manchester Society for the Preservation of Ancient Footpaths’: one of the earliest examples of a society of this type.

The plaque was attached to Flixton House – Ralph Wright’s former residence – on Monday, November 15, 2021, and replaced an earlier plaque attached to Flixton Station which was destroyed in a fire in the 1990s. It was the first blue plaque unveiled by the Council since the beginning of the pandemic.

“The erection of the plaque marks a very important date for Rights of Way campaigners not only in Trafford but also in the UK. The Flixton Footpath Battle was an historic victory for residents opposed to the blocking up of footpaths in the area and is quite rightly seen as a huge turning point.

“The plaque is the first of its type to be put up in Trafford since the start of the lockdown and it is important that we continue to celebrate such historic occasions this way. Thank you to everyone involved in the project to celebrate the success of the ‘Flixton Footpath Battle’. Those of us who enjoy walking in the great outdoors owe the campaigners such a lot.”