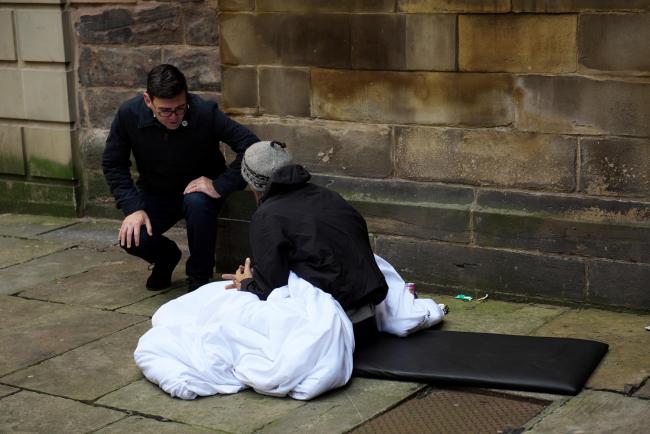 The Mayor of Greater Manchester’s Homelessness Fund has raised £135,000 thanks to the hard work and generosity of people across the city-region.

The Mayor’s Homelessness Fund is an important part of Greater Manchester’s efforts to end rough sleeping by 2020. Money raised by the Fund alongside effective partnership working by local agencies, organisations, business and authorities including Manchester City Council, has meant that new and innovative solutions have been created and implemented across Greater Manchester to tackle rough sleeping and homelessness.

The Fund’s new total has been reached after the fund received an early Christmas boost with more than £50,000 being donated from proceeds of ‘This Is The Place’ book and a further £10,000 donation from fundraising by Towergate Insurance.

The ‘This Is The Place’ book has been created by over 60 Manchester creatives who each took a line from the Tony Walsh’s iconic poem to inspire unique pieces of art, illustration, design and photography. Their work is now contained in a one-of-a-kind book with proceeds going to charitable causes, including the Mayor’s Homelessness Fund.

As well as the donation from the proceeds of the ‘This Is The Place’ book, Towergate Insurance will today (Tuesday 19 December) hand over a cheque for £10,000 to Mayor Andy Burnham outside the ‘Stall for all’ in Stevenson’s Square – an alternative Christmas market which is raising money for the Mayor’s fund and Big Change.

The Mayor is due to receive the donation from Towergate Insurance after an early morning walkthrough the city-centre where he’ll speak to people who are sleeping rough, alongside charity workers from Riverside. Since his first day in office the Mayor has regularly been out in the city-centre meeting rough sleepers with charity workers, to hear first-hand the reasons why people are finding themselves on the street.

Andy Burnham said: “When I was elected I asked people to support our efforts to end rough sleeping in Greater Manchester and I have been taken aback by the generosity of people in our city-region.

“I’d like to thank everyone who has given their time, money and effort to help those in Greater Manchester who desperately need our support. Tony Walsh and everyone who was involved in the creation of ‘This is the Place’ book deserve particular thanks, once again they’ve shown the true spirit of Manchester and the money they’ve raised will help to make real positive change in our city-region.

“Since being elected I’ve regularly been out on our streets speaking with those who have no alternative but to sleep in doorways, risking their lives as temperatures plummet. It is unacceptable that this is still happening in 2017.

“We are working flat out to end rough sleeping in Greater Manchester by 2020, with ground-breaking solutions agreed that will make a real difference. Raising £135,000 is an incredible achievement, but we cannot and will not stop until we have ensured everyone has a safe and secure place to stay across Greater Manchester.”

The Mayor’s Homelessness Fund was set up by Andy Burnham on his first day in office to support organisations and charities who are working to tackle rough sleeping and homelessness in Greater Manchester.

Andy has donated 15% of his own salary, making his December donation to the fund today, and the money raised has already been used to help open a 15 bed hostel in Cheetham Hill, support the Emmaus charity who work with their residents on trade and entrepreneurial skills and allowed Street Support Network to expand their online information hub for people who are homeless to every Greater Manchester borough.

In addition to the work of the Fund, earlier this year all 10 Greater Manchester local authorities agreed to rip up the rule book and ensure a whole host of provisions were put in place to support people who are sleeping rough. Greater Manchester councils now ensure emergency support is given as soon as temperatures drop to freezing, rather than the legally-required three days and people who are homeless are now able to access documents needed to gain housing for free and can get help from a GP.

In addition, a £1.8million social impact bond will help to provide accommodation, intensive health support and improvements in the way homeless people are encouraged into education or work for up to 200 entrenched rough sleepers.

Andy added: “These changes will make a real difference to people. We are giving hope that people can break out of the circumstances they are in. The partnership work being done across Greater Manchester will save lives.”