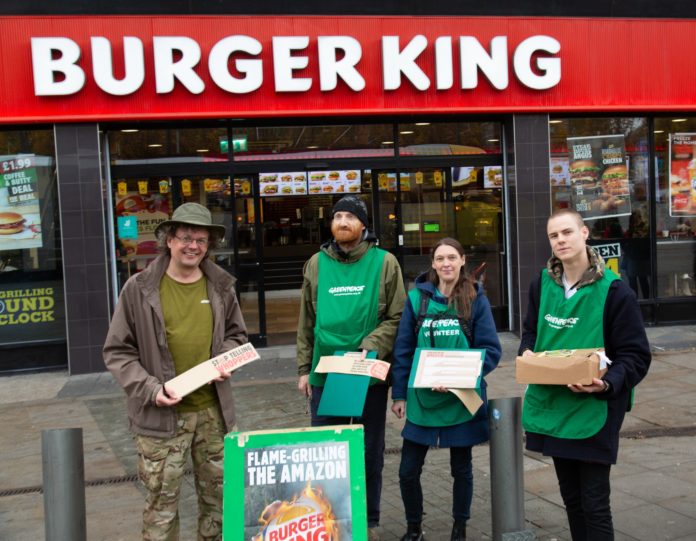 Forest fires in the Amazon have been raging throughout the summer, many started deliberately by farmers, emboldened by the Brazilian President’s policies to expand agriculture. Burger King admitted in a statement to the BBC that it knows the chicken and some of the beef it sells in the UK is fattened on animal feed made with soya [1] and the fast food giant also admitted on social media that it buys chicken directly from Brazil [2].

Martin Porter said, “The Amazon may be 5000 miles away, but it is a global carbon sink and the world’s air conditioning system. The Amazon fires aren’t just bad news for the tribes that live in the forest, they affect our climate too. Most people order fries with their burger, but this fast food chain is serving up forest fires instead. That’s why we’re telling Burger King to stop sourcing meat and soya from Brazil until the Amazon and its people are protected.”

Despite the atrocious weather, more than 40 people wrote messages to Burger King, including Derek, a City fan visiting from Scotland who wrote “Stop this nonsense, save the rainforest”. People also asked Burger King to sell less beef and more vegetarian options. These messages will soon be delivered to Burger King’s HQ by spider monkeys!

Martin continued, “Once again it was wonderful to see what a global city Manchester is and how concerned people were about something happening a long way away. People are realising that cheap Fast Food is not worth the cost and are trying to reduce their meat consumption.