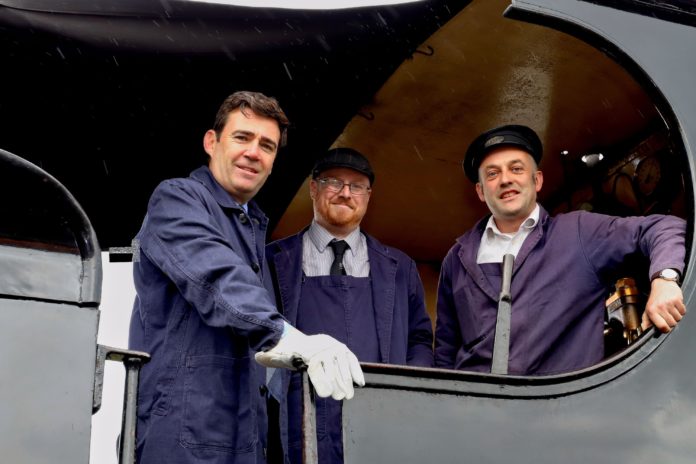 The Bury based East Lancashire Railway was delighted to welcome the Mayor of Greater Manchester, Andy Burnham, for an official visit on Thursday 26 September.

The award-winning heritage railway, Greater Manchester’s third most visited paid attraction, registered charity and volunteer run organisation, hosted the Mayor for a tour of their engineering hub and a ride behind one of their heritage steam train fleet last week.

During the visit the Mayor met engineering experts, apprentices and some of the railway’s dedicated team of 800 volunteers that keep the organisation on track.

The Mayor also listened to the railway’s future plans, including the proposed Buckley Wells rail depot infrastructure project, extension to Castleton, the popular ‘evacuees’ rail visits offered to primary schools and continued role in the development, health and wellbeing of people.

“We were pleased to welcome the Mayor of Greater Manchester for his first visit to the East Lancashire Railway. As one of the North West’s major tourist, heritage and cultural attractions offering a unique experience of a bygone era, it was great to highlight the huge scale of our operations and the positive impact they have on our local community and visitor economy.”

“Over the past decade the railway has gone from strength-to-strength with over 200,000 visitors per year, with the upkeep of the railway adding real value to local supply chains and increased employment opportunities. It was brilliant for our staff and 800 volunteers to get the backing of the Mayor and have the important economic and educational value that we bring to our region recognised.”

“I really enjoyed my visit to the East Lancashire Railway, from my arrival at their historical Locomotive Works which has been there since the dawn of the railways to riding on the footplate of one of their magnificent heritage steam engines.“

“It was particularly interesting to learn about the organisation as ‘living history’, its involvement in our city-region’s community and local economy, as well as its future plans. The East Lancashire Railway operation is impressive, as is the passion and devotion shown by staff and volunteers who brought this important part of the North West’s industrial heritage back to life.“

“Greater Manchester is a vibrant city-region, known around the world for our music, artists and cultural venues, and I was proud last week to launch our Town of Culture award in Bury. Our cities have an amazing cultural offering but our towns also have history, culture, character, connection and community. We should value and share this vibrancy.”

To find out more about the East Lancashire Railway visit www.eastlancsrailway.org.uk.

University of Manchester told to cease transportation of all radioactive materials