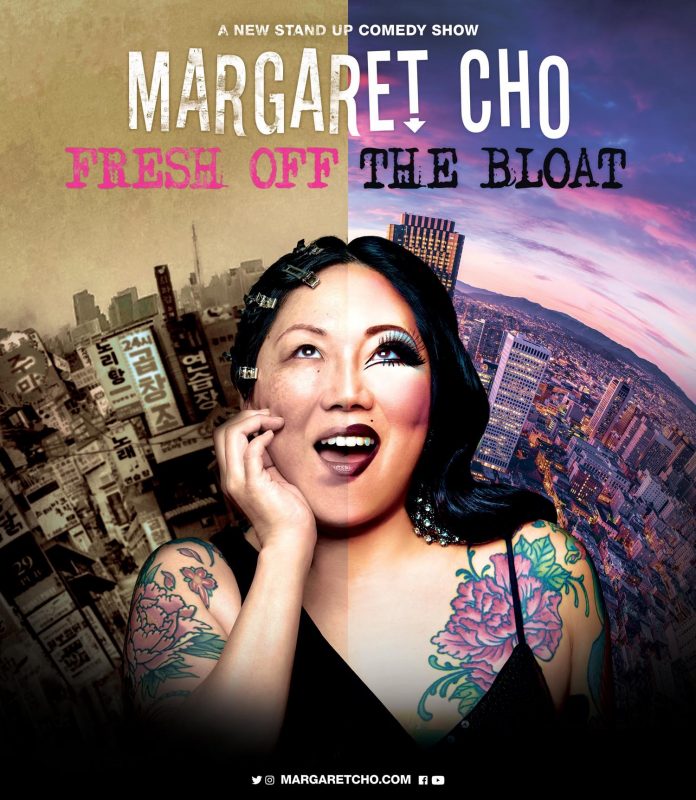 Five-time Grammy & Emmy nominated US comedian Margaret Cho has much to celebrate as she was recently named one of Rolling Stone magazine’s 50 Best Stand-Up Comics of All Time. Cho is set to launch what is sure to be her sickest stand-up comedy show to date this autumn.

The UK tour takes in 7 dates, starting on the 25th November at Edinburgh’s Queens Hall, and culminates at London’s o2 Shepherd’s Bush Empire on 10th December.

A pioneer amongst women in comedy, Margaret doesn’t take anything for granted as she continues to tackle difficult subjects with sensitivity. Bringing her razor-sharp insight with her, Cho takes on addiction, abuse, activism and Asian-ness. It’s all about the politics of disgust and what is disgusting about politics.

Aptly titled, “Fresh Off The Bloat,” Margaret says, “This is my sickest show to date.  My grandmother said, “You look like bloated as if you’ve been found dead in a lake after several days of searching.” Koreans are the most savage of all the Asians. My new show is all about being fresh off drugs and drinking and suicide and coming back to life – finally fished out of the river Styx. It’s meta. It’s magical. It’s me.”

Margaret’s new TV project, ‘Highland’, has been picked up for pilot by TNT Network.  The show will chronicle what happens when two extended, dysfunctional Korean-American families, who share the same patriarch, must come together after tragedy strikes. As it turns out, the most reliable person in both families is the one who just got out of rehab.

Soon after starting her Stand Up career, Margaret won a comedy contest where the first prize was opening for Jerry Seinfeld. She moved from her home in San Francisco to Los Angeles in the early ’90s and, still in her early twenties, hit the college circuit, where she immediately became the most booked act in the market. She performed over 300 concerts within two years. Arsenio Hall introduced her to late night audiences, Bob Hope put her on a prime time special and, seemingly overnight, Margaret Cho became a national celebrity.

Since then, she has had multiple world-wide critically acclaimed sold out tours – including a US tour with Cyndi Lauper, Debbie Harry and Erasure, along with indie faves The Dresden Dolls, to host the True Colors Tour, benefiting the Human Rights Campaign.

Margaret has starred in the comedy/drama series ‘Drop Dead Diva’, which aired for six seasons on the Lifetime network. Never one to shy away from a challenge, she performed on Season 11 of the highly rated US TV show ‘Dancing with the Stars’. Margaret’s creative side moved ahead at full speed with an Emmy nomination for “Best Guest Performance” on Thirty Rock. After the devastating death of her mentor, Robin Williams, using the hashtag #BeRobin, Margaret began setting up shop in different places around San Francisco to raise money for the Homeless community.

In what is a fitting tribute, Margaret is a special co-host of E!’s Fashion Police, covering the biggest award shows since 2016. This has a unique significance, as Joan Rivers was not only a friend, but also a vocal supporter of Margaret. “Although I am not quite a fashionista, I would love to look at it like I am changing it up – Fashion Police: Special Victims Unit. It makes me happiest to spend time with Melissa (Rivers), and when I see her laugh at my jokes, I feel like Joan is smiling.”

With so much success in her artistic life, Margaret has never turned away from the causes that are important to her. She is incredibly active in anti-racism, anti-bullying, advocating for the homeless and gay rights campaigns, and has been recognized for her unwavering dedication from multiple organisations across the USA notably from LA Pride, who gave Margaret a Lifetime Achievement Award for leaving a lasting imprint on the LGBT community.

The ‘Fresh Off The Bloat’ tour dates are as follows: