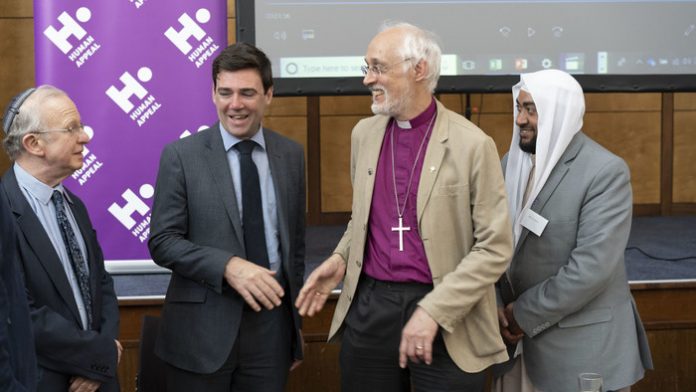 Human Appeal, the leading Muslim faith-based charity in Greater Manchester, launched their Ramadan campaign on Monday 14th May at the Friends’ Meeting House in Manchester with an interfaith event.

The event, Sharing Ramadan, was addressed by Mayor of Greater Manchester, Andy Burnham, Bishop of Greater Mancheser David Walker, Rabbi Dr Reuven Silverman of the Manchester Reform Synagogue and a lady named Natalie who had lived experience of homelessness. The event fed 80 guests in attendance who were all homeless people, people with lived experienced of homelessness or staff and volunteers from charities dealing with homelessness.

At the Sharing Ramadan event Human Appeal announced their Ramadan plans to introduce an innovative new scheme to issue prepaid gift cards from the Co-op to homeless people and households with food insecurity, they are hoping to raise enough funds to issue the prepaid gift cards for 500 people across Greater Manchester.

Throughout the entirety of Ramadan, they will fund the costs of Street Kitchen, who provide homeless people in London with warm meals

“We are using this opportunity to celebrate the start of Ramadan by sharing it with the rest of Manchester, especially those most in need. We are excited to, once again, have the support of our friend Andy Burnham. We work closely with The Mayor and his team as part of his homelessness task force and he is a huge supporter of our work. We are excited to announce our exciting new Ramadan projects to help homeless people across the city.

“In attendance at Sharing Ramadan with rough sleepers, people with lived experience of homelessness and the staff and volunteers who help them. We have leaders from the Muslim, Christian, Jewish and other faith groups in Manchester speaking and the message is loud and clear – it is only by working together and embracing our differences that we can achieve incredible things, and the incredible thing we want to achieve is ending rough sleeping in Manchester.”

Ramadan will begin for Manchester’s Muslims on either Wednesday 16th May or Thursday 17th May, so Human Appeal used this opportunity to celebrate their holy month with non-Muslims and highlight how Muslims and non-Muslims can work together to tackle homelessness in the UK. Ramadan is the busiest time of year for Muslim charities, where they expect to take 50% of their annual income in donations in the month of Ramadan alone. The event displayed how the different communities across Manchester can work together and how they can help achieve The Mayor’s pledge of ending roughing sleeping in the city. Human Appeal are a key member of The Mayor’s homelessness task force.

Human Appeal, last year, donated £170,000 to help people in the UK during Ramadan and this year they hope to go even further.

Every winter Human Appeal also run their Wrap Up Manchester campaign, which in 2016 collected over 1,500 coats and items of clothing for rough sleepers and other vulnerable groups in Greater Manchester and in 2017 it collected nearly 2,600 plus an extra 23,000 in Glasgow, Birmingham and London.

Human Appeal also raised nearly £28,000 for the victims of the Manchester Arena terror attacks last Ramadan through their Muslims for Manchester campaign.

Sir Graham Brady calls for early end to lockdown which is based on flawed...

St Michael’s scheme goes back to the planning committee