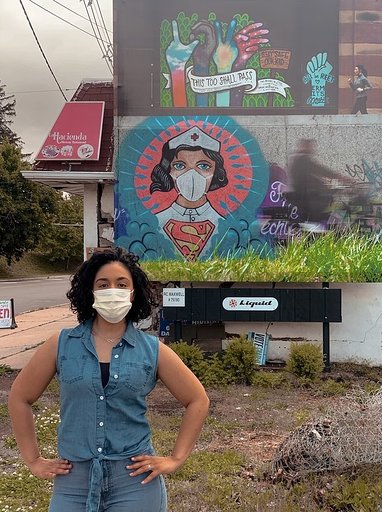 With Mancunians, Brits and the rest of the world facing uncertain times, Great Northern commissioned a new mural in the heart of the city to provide locals with hope and reassurance.

However, the beautiful artwork’s positivity has spread much further than across Manchester and is even helping to support communities across the Atlantic.

Recently, the poignant Mancunian mural has appeared on a billboard in New Brunswick, New Jersey, USA. The replica has been created to show gratitude to medical professionals in the states and to spread some of our northern love across their community.

As if by fate, the New Jersey billboard selected to adorn Manchester’s uplifting mural sits across from La Hacienda Restaurant. As we all know, The Hacienda Manchester became the most famous nightclub in the world throughout the 80s and 90s and has remained an integral part of Mancunian culture.

A simple message, ‘THIS TOO SHALL PASS’, is wrapped around the colourful letters L-O-V-E, and overlaid on a leafy backdrop. A small signpost is also incorporated into the design, reminding locals to stay safe.

The overwhelming positive response to the mural was the catalyst for the Great Northern’s Messages of Hope campaign, which encourages people of all ages and abilities across the city to draw their own inspirational artworks. The top 100 entries will then be featured in an exhibition, once it’s safe for doors to reopen, to raise money for Forever Manchester who are helping those worst affected by Covid-19 throughout the city.

Centre Director Mark Schofield said: “We love the mural that’s been created at the Great Northern. We wanted MOZE to create such an inspirational piece as we’ve all been struggling these past months so we wanted a design that would give the people of Manchester hope that we will find a way forward.

“It’s amazing to see our famous northern friendliness spread across the Atlantic. In Manchester we stick together and support one another, we also have and always will, so we’re so proud that our Mancunian outlook can spread some love across the New Brunswick community.”

If you would like submit a piece of artwork for the Messages of Hope campaign, simply share your picture and tag the Great Northern Warehouse on any of its social channels; Facebook, Instagram or Twitter.  Or alternatively, please email your artwork to emma.james@thegreatnorthern.com.