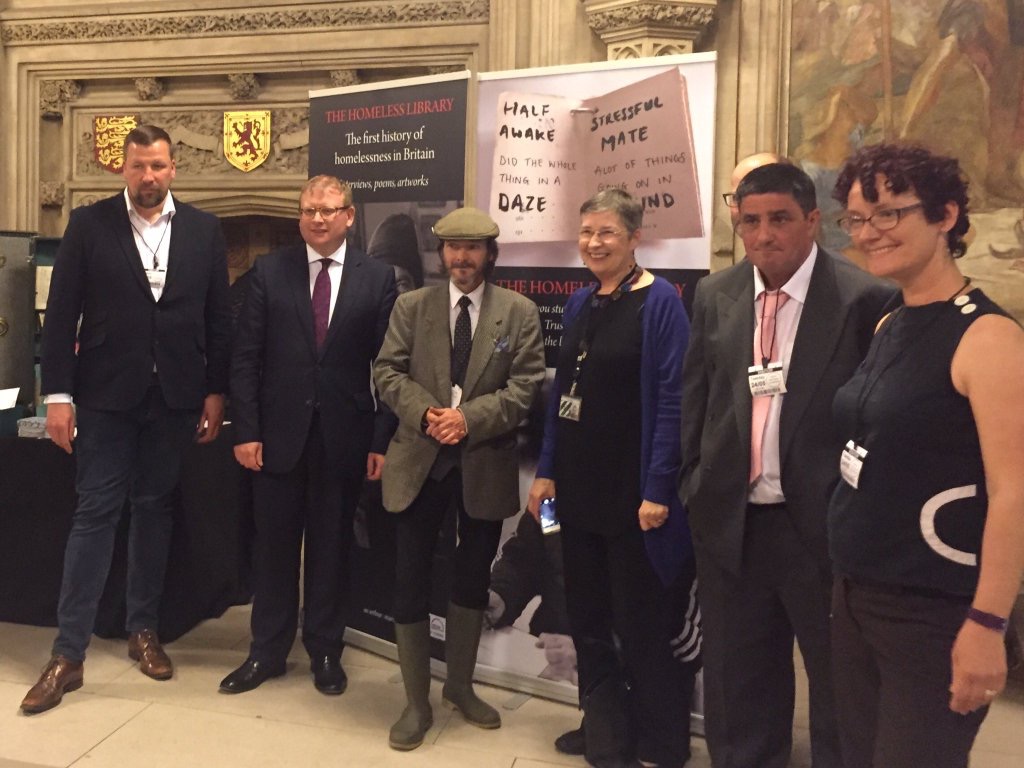 Homeless Library 2Homeless people in Greater Manchester and Stockport have handmade the first history of British homelessness, which had its debut at the Houses of Parliament this week.

The Homeless Library is supported by The Heritage Lottery Fund and partnered with The Wellspring, The Booth Centre, and Bury Art Museum.
Stockport MP Ann Coffey, Chair of the All Party Parliamentary Group for Runaway and Missing Children and Adults, opened the exhibition in the Upper Waiting Hall of the House of Commons at 3pm on May 24, 2016. The exhibition will be on display in Parliament for the rest of the week and then go on to public exhibition at the Southbank Festival of Love, 9 July-18 September and will tour venues in NW England.

The Homeless Library has been made by local homeless people and opens up previously untold stories of the lives of homeless people through interviews, artworks, poems and handmade books. This unique and unprecedented history of British homelessness has been devised by arts organisation arthur+martha.

“This project is both a piece of history and an art piece. I don’t think I’ve ever come across anything like it before. It’s beautiful. This is not only a history of facts, the very material of each of these handmade books in The Homeless Library tells its own story. It is full of emotion. I feel I can reach out and touch it.”

“These are fascinating stories that need to be heard. Being heard is something that everybody needs, it makes us a society. Maybe these books are something we can all learn from – and maybe we can help the storytellers.”

Many homeless people live and die as ‘invisibles’. When they die their very existence sometimes leaves no mark. This project opens up an untold chronicle, that exists off the pages of official history books.

Instead, it is a history based on conversations: people’s descriptions of their own lives, as told by contemporary homeless people and also older people who witnessed homelessness from the 1930s onwards. Along with interviews, there are artworks and poems.

Interest rates rise to 0.5 per cent