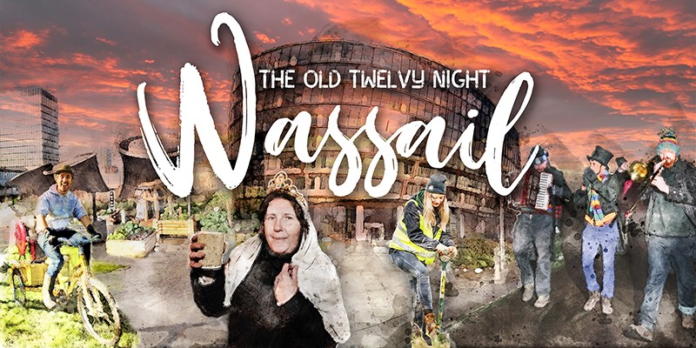 Hanging toast in trees, pouring cider over roots and crowning orchard queens. Not your usual customs for a Friday night in Manchester, but that’s exactly what’ll be happening at the city centre’s first ever Wassail ceremony on Friday 17th January 2020. Usually the reserve of country bumpkins, farmers and folk from the South West, Herefordshire or the apple growing regions of Kent, this ancient ritual has seen a revival of late. This last foray of winter celebration will be led by community orchard experts, The Orchard Project, the only national charity dedicated to planting and restoring community orchards.

The Orchard Project’s Dan Hasler, Project Manager for Manchester, has been planting and restoring community orchards across Greater Manchester since 2015. “Wassails are essentially ceremonies to bless orchards. This age-old custom brought the community together in the darkest of months to celebrate the apple harvest from the previous year and look ahead to next year’s crop. It’s a way of thanking the trees for their hard work and an excuse to hold off dry-anuary for a few extra days!”

Typically wassails were held on Twelfth Night. You’re thinking, ‘that’s the 6th of January, right?’ Wrong! See we have Pope Gregory, circa 1582, to thank for our modern calendar, but the orchard traditionalists still see 17th January as the ‘proper’ night to celebrate. Many orchardists still respect the tradition of ‘Old Twelvy Night’ for their wassails and, handily, this year that falls on a Friday night.

So it’s time to get your dancing shoes on as this wassail is going whole hog with the all-female, The Milltown Cloggies (think Morris dancing with a twist), who will head a parade from The Marble Arch Inn on Rochdale Road, led by Dick Withecombe from Manchester Cider Club. “We’re on the brink of a major revival for high quality, full juice cider and with traditional events such as these promoting the humble apple, we’re happy to lead the charge,” says Withecombe. Don’t miss the after show party too back at The Marble Arch Inn, where the festivities continue. Jan Rogers, Director of the pub says, “We’ll be cooking up an apple-themed menu, the cider will be on tap and the fires will be burning outside. So make sure you leave your dancing shoes on!”.

Local cider maker Chris Hewitt, from Dunham Press Cider, one of the region’s award winning cider producers, will also be involved. “We’ve hosted a fair few wassails on our cider farm for the past few years. Tradition states that to scare off the bad spirits in the orchard you need to make a lot of noise; for this city centre wassail, I’ll be leaving my shotguns down on the farm, but we’d encourage families to bring along their pots and pans to make a right hullabaloo,” says Chris. You’ll be able to buy a bottle or two of his juice or cider to drink on site or take away to perhaps wassail your own apple tree at home.

Sticklers may now be asking: “Where are the orchards in the city centre?”. It just so happens that a community orchard was planted in the heart of the city, right outside the Co-op headquarters on Angel Square by event partner and city centre developer N.O.M.A.

Manchester charity, City of Trees, will be attending to plant another tree as part of the celebrations. “Planting trees in urban locations is great for bringing in beauty and biodiversity plus in the years to come both bird and beast can feast on the fallen fruit – that’s if the humans don’t get there first!” says Beth Kelsall from City of Trees.

There will be a cider and juice bar open and apple-themed activities from 4:30pm on One Angel Square, including The Orchard Project’s natty vintage trike converted into a pedal-powered juicing machine, aptly named ‘Pedal Pedal Squish Squish’. Don’t miss the pre-show drinks and parade at The Marble Arch from 5:00pm. The wassail ceremony officially kicks off with a song and dance at One Angel Square at 6pm. This free/pay-as-you-feel family-friendly event is not to be missed.

Two of Manchester’s most acclaimed classical music stars will return to the city where...