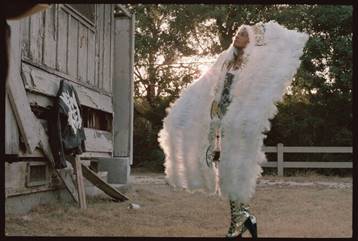 After cutting her teeth as part of the girl group Danity Kane and the influential r&b project Dirty Money, Dawn went solo, releasing the acclaimed Blackheart album in 2015.

As inspired by experimental electronic music as the boundary-less world-building of Bjork, Blackheart reached #2 in the Billboard Dance charts and was acclaimed across the board: FACT named it their #1 album of 2015, The Guardian called it “the most ambitious and revelatory album of the year”, while Pitchfork described it as “a singular, visionary work.

Following a year developing her relationship with technology – Dawn is an animator and curator for Adult Swim and was the first artist to perform in 360 degrees live on YouTube and has partnered with Wired and The Verge on boundary-pushing tech projects, Dawn released her third solo album Redemption in November 2016 – finishing #4 in the Billboard Dance charts.

Rolling Stone ranked the “staunchly independent pop trailblazer” as one of their Musical Renegades of 2016, a list of the key artists succeeding on their own terms that also included Beyonce and Chance the Rapper, while the NME branded Dawn “the pop star who dares to be a little bit different.”

Following eighteen months focused on touring Redemption and collaborating – she featured on Dirty Projectors’ 2017 hit single ‘Cool Your Heart’, as well as tracks from Kimbra, Jimmy Edgar and Mumdance – Dawn returns with new breed, a new album that sees her return to her birthplace of New Orleans both musically and spiritually, drawing from the city’s rich musical heritage and traditions as well as her experience as a black independent woman in the music industry.

Her most stripped back and intimate album yet, new breed was the #1 R&B & Soul album in

Dawn plays YES (The Pink Room) on the 14th April

A Bowie Celebration – The David Bowie Alumni tour returns to Manchester at the...