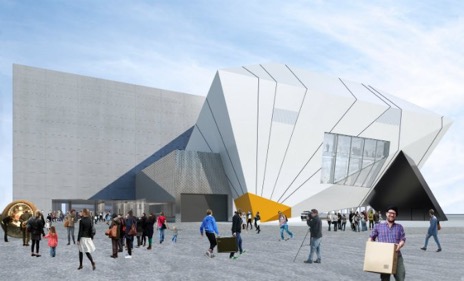 The brand new £112 million venue, which will be home to Manchester International Festival, will be one of the largest purpose-built cultural spaces in the world, enabling the world’s best artists to create work of a scale and ambition not possible elsewhere.

It will create and support 1,500 full-time jobs and adding £1.1 billion to the city’s economy over a decade.

However Manchester Council has been blasted for a what appears to be a complete oversight in plans for disabled access within the flagship Factory arts centre.

In a letter to the council, the Theatres Trust, who is being consulted in its capacity as the national advisory body for theatres, said revised designs raised serious concerns over the standard of wheelchair access.

Worryingly, concerns were also raised over how wheelchair users and people who need assistance would be evacuated in an emergency.

Plans also reveal that there is only one wheelchair-accessible toilet within the entire theatre.

A key focus for The Factory will be providing training for local people wanting to work in the creative industries in roles from technicians and producers to marketing.

The state-of-the-art space will enable the next generation of talent from Manchester and Greater Manchester to develop their expertise by working alongside world-leading creatives. There will also be opportunities for local artists to develop and grow.

Sir Richard Leese, Leader of Manchester City Council, said: “Culture and creativity have a critical role to play in Manchester’s future success – not just by inspiring ideas and imaginations but through creating opportunities and jobs. The Factory will help take this to a whole new level and open up a new chapter in Manchester’s history of innovation.

“Not only will people no longer need to move to London for the best cultural and creative roles, it will give audiences from around the country and even the world another great reason to head here.

The Factory is due to open in September 2020, a year later than originally planned.