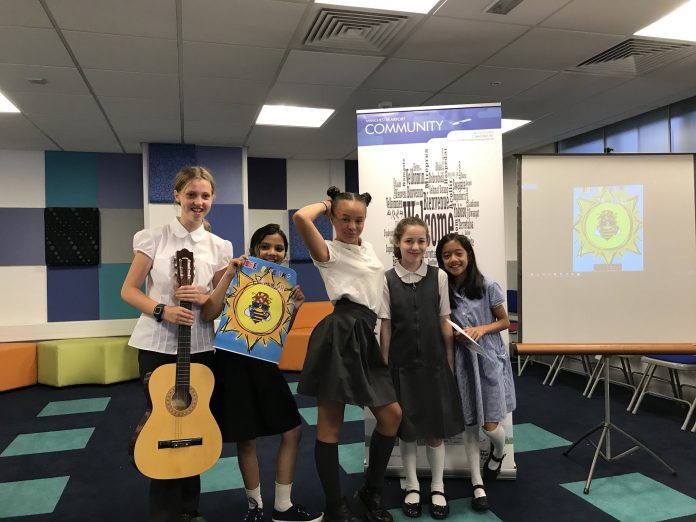 The students from SS John Fisher and Thomas More Catholic Primary School wowed the judges, who were impressed with their creative skills, independence and how well they cooperated with each other on the project, even beating 19 other schools to bag the top prize.

The winning poster will be displayed across Manchester Airport’s three terminals during the summer season to remind sun-lovers to use sun cream, wear sunglasses and drink plenty of water through its worker bee theme and catchy slogan: “Don’t get stung by the sun!”

The winning students were also given the opportunity to record their radio advert professionally at the Global Radio studios in Manchester’s Spinningfields, with the advert broadcast on the radio several times during the summer months.

Wendy Sinfield, Community Relations at Manchester Airport, said: “All of the students were fantastic and we were so impressed with their creativity. The team from SS John Fisher and Thomas More really impressed the judges, having worked so well together and demonstrated a real creative flair. I’m really looking forward to seeing their poster in the terminals and hearing their advert on the radio, and I would encourage more schools to join in next year.”

A trophy was presented to the children on Monday 16 July by John Bedson, Chair of the Manchester Airport Community Network, and Chaplain George Lane from Manchester Airport. The whole school was treated to a circus performance and an opportunity to learn professional circus tricks throughout the day with Circus Sensible as a special congratulations.

Deputy Headteacher of SS John Fisher and Thomas More, Katie Corigan, is delighted with the pupils’ success, saying: “The competition opened up an area of real life learning for the children that we wouldn’t have previously touched upon. It was engaging, exciting, and inspiring for the students, and highlighted jobs and aspirations for our pupils that they may not have thought about before. Winning has been incredible and left the children feeling excited, inspired and with memories that will last a lifetime.”

Double amputee dog invites dog lovers of Manchester to join her for the final...