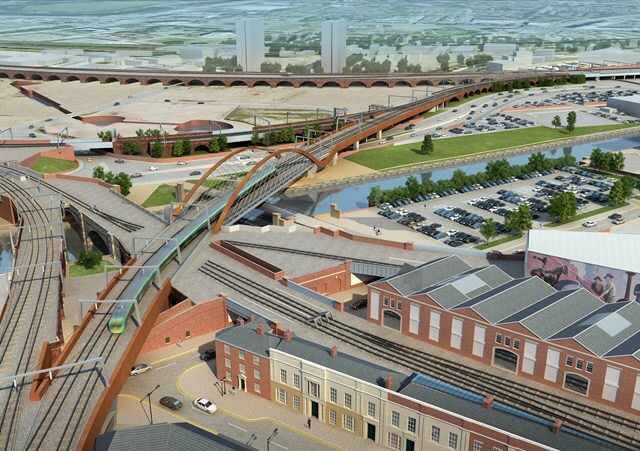 Work to improve rail links across the north of England will affect rail services in the Manchester area over the Easter period and beyond.
The work – part of over £1bn of railway improvements by Network Rail in the north – means Manchester Victoria and Salford Central stations will be closed from Thursday 24 March to Monday 4 April.

While no services will run in and out of Salford Central and Manchester Victoria for 11 days, alternative stations will be available, such as Manchester Piccadilly and Oxford Road.
Engineers will be moving existing track on the approach to Manchester Victoria station so when the 300 metre-long new section of track has been completed, it will be able to connect and fit in with the new track layout.

Martin Frobisher, route managing director for Network Rail, said: “I recognise this work will cause disruption for passengers. But I would urge people to view this short-term pain against the long-term gain it will help achieve for Manchester and people and businesses across the North of England.

“The Ordsall Chord will bring better connectivity and faster journeys between the great cities of the North, including Hull, Newcastle, Liverpool, Leeds and Manchester.”

Network Rail has been carrying out preparatory work for a number of weeks on overhead lines, waterproofing and signalling without affecting passenger services.
Over Easter arches supporting the railway will be strengthened to enable heavier loads to be carried in future. Other work will involve widening Middlewood viaduct and installing a new bridge in the same area.
The Ordsall Chord is a key part of Network Rail’s investment in the North of England, helping to bring faster, more frequent, more reliable train services in future. It will create a piece of railway history by linking both Victoria and Piccadilly stations for the first time as well as reducing congestion on the railway.

The 11-day closure means train services will not be running from or to Manchester Victoria but trains will still run to other stations within the city with some services being diverted to Manchester Piccadilly. Trams will continue to run to Manchester Victoria during this time. Bus replacements will also be made available and commuters are being urged to check before they travel. Full details of what this means for Northern Rail customers will be available from Monday 29 February 2016.

Alex Hynes, managing director, Northern Rail said: “Once completed in 2017, the Ordsall Chord development will not only link Manchester city centre by Victoria, Oxford Road and Piccadilly stations but it will also enable faster trains to run across the north of England.
“This closure of Manchester Victoria and Salford Central is one of the first steps towards these benefits. While these stations are closed, journeys into other Manchester stations are not impacted. Our advice to customers is to check before travelling and allow additional time where possible.”

Councillor Andrew Fender, chair of the Transport for Greater Manchester committee, said: “The Ordsall Chord project is part of a transformational programme of work that will significantly improve our railway infrastructure and services and, as with all major projects, there will unfortunately be periods of disruption for passengers.
“The closures of Manchester Victoria and Salford Central have been planned to coincide with the Easter school break, when traditionally fewer people will be travelling.

“Replacement bus services will be in operation and other major rail stations of course remain open as usual. Coupled with the frequent Metrolink services – which will not be affected by the closure of Manchester Victoria – Metroshuttle and other bus services that will be operating in and around the city, there are plenty of options to help people get around and I’d encourage anyone intending to travel during this period to plan their journey well in advance.”