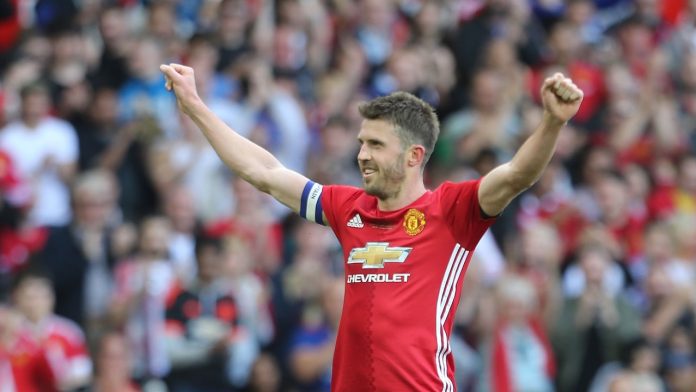 Manchester United and England midfielder Michael Carrick has recently confirmed that this will be a his final year in the game, as a player with the 36 year old set to hand up his boots at the end of the current campaign.

The Wallsend born former West Ham and Spurs midfielder has found his playing time limited this season due to an irregular heart rhythm, but manager Jose Mourinho looks set to offer Carrick the chance to stay at the club in a non-playing capacity.

Carrick turned professional at West Ham after coming through their youth system and went on to play 139 games for the club before he made the move across London to join their rivals, Tottenham Hotspur. The midfielder was quickly making a name for himself as one of the brightest talents around with his passing ability and understanding of the game his stand out attributes.

There was often talk that Carrick would go on to play for one of the biggest sides in the country; and that became a reality in July 2006 when Manchester United’s Sir Alex Ferguson agreed to pay £18.6m to bring the then 25-year-old to Old Trafford. He was immediately handed the number 16 shirt formerly worn by Roy Keane as Ferguson looked to install Carrick at the heart of his midfield.

Carrick went on play a huge part in United’s success over the years making 463 appearances in all competitions scoring 23 goals and providing 36 assists. Carrick’s switch to Old Trafford saw him become a serial winner as he went on to be a part of a side that competed for glory on all fronts consistently. They and Carrick won the Champions League, the Europa League, the Premier League title (5), the FA Cup, the League Cup (3), the Club World Cup and the Charity Shield.

The midfielder also managed to collect 34 England caps during his career to which is no mean feat when he had to compete with the likes of Paul Scholes, Steven Gerrard and Frank Lampard for a starting berth. He managed to be a part of the squads which went to the 2006 and 2010 World Cups too. His last appearance for the England senior side came back in 2015 in a 2-0 defeat to Spain, but Carrick will certainly be able to look back at his 34 caps proudly.

The 36-year-old has been a model professional throughout his career and while it’s a shame that his playing career is about to come to an end; especially with the Old Trafford faithful in an unsettled period, which has been underlined by the fact that Jose Mourinho’s team have only the FA Cup competition to focus on, with Unibet having them 43/20 joint favourites with Spurs to win the trophy.

In spite of this, it’s certainly good news for the game in general especially as Carrick looks set to stay involved in some capacity. He’d be ideal working behind the scenes at United possibly coaching and mentoring the youngsters coming through the ranks.

It wouldn’t be a surprise either to see Carrick getting involved within the England set up either. He knows what it takes to play for his country and how these players are looked at as role models by others. Whatever Carrick chooses to do next it’s pretty nailed on that he will make a success of it especially after such an illustrious playing career.

Reports of my demise are garbage says Jose