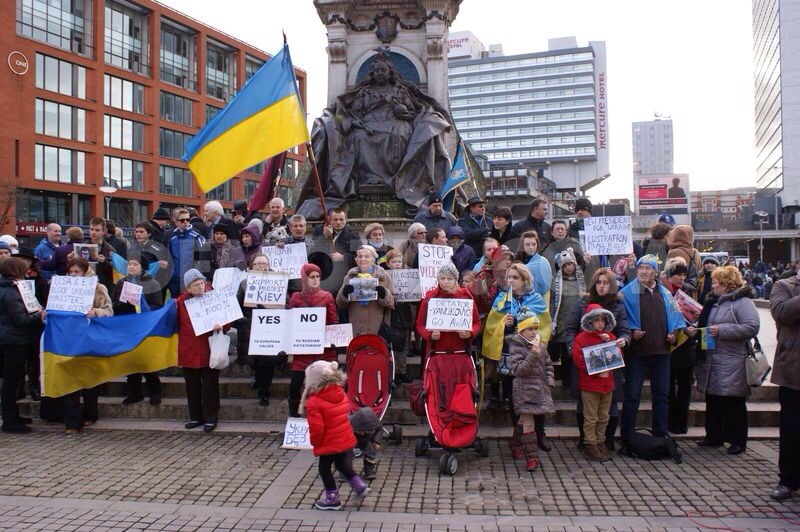 With events in the Crimea dominating the news bulletins, let us not forget that Manchester has strong connections with Ukraine.About Manchester takes a look at those and beneath gives a brief history of Crimea

Ukrainians first migrated to Manchester in the late nineteenth and early twentieth century and settled around the Red Bank area of Manchester. This first wave came from the Austrian crown land of Galicia and by 1912 numbered approximately 500 people, most of whom subsequently re-settled in North America or returned to Galicia. In 1933 the community numbered about 150, including children born in the UK.

After the Second World War when the country had suffered greatly further Ukrainian immigrants and displaced persons from Western Ukraine, settled in the Cheetham area. They came Between 1946 and 1951, after registration and screening, Ukrainians were awarded European Volunteer Worker scheme.It is estimated that around twenty nine thousand came to the UK, settling not only in Manchester but also Nottingham and London

A Short History of Crimea

The Crimean Peninsula occupies a strategically important location on the Black Sea and has been fought over by various outside forces for centuries.

Going back to the times of the Mediterranean empires of the Greeks and later the Romans, it was called Taurica. Both empires, given its strategic importance would incorporate it the into their empires.

After the decline of the Roman Empire, the peninsular was occupied by Gothic tribes, the Kievan Rus’ state, the Byzantium empire and the Mongols, From the thirteenth century it existed as the Crimean Khanate, a protectorate of the Ottoman Empire, and became the center of a roaring slave trade.

The Crimean Tatars were responsible for its modern name of Crimea.They were a Turkic ethnic group that emerged during the Crimean Khanate called the peninsula “Qırım.”

Russia annexed the state in 1783, and tried to change the name back to Taurica, Crimea was still used informally and eventually reappeared officially in 1917.
The region came to prominence during the Crimean War, which began in 1853 and involved three years of bloody fighting between Russia and an alliance of the Ottoman Empire, France, Britain and Sardinia. Russia lost the war and the region suffered significant damage, but it remained part of Russia.

After the October Revolution ended the Russian Empire in 1917, Crimea briefly found itself a sovereign state but it was quickly dragged into the Russian civil war, becoming a stronghold for the White Army which was fighting the Bolsheviks.

Crimea eventually became the Crimean Autonomous Soviet Socialist in 1921 as part of the Soviet Union.

It was occupied by Nazi Germany after 1941 and the port city of Sevastopol was almost destroyed in the fighting. Once the Red Army retook Crimea in 1944, it forcibly deported the entire population of Crimean Tatars to Central Asia as punishment for collaboration with German forces. Almost half are believed to have died along the way. The Tatars, who had been on the peninsula for centuries, were not allowed to return to Crimea until the end of Soviet Union. In their place Russian speaking settlers moved in and Crimea was a very Russian place.

In 1954 the new Russian Premier Nikita Khrushchev transfer the Crimean to the Ukrainian Soviet Socialist Republic asa “gift” for Ukraine, whose people had suffered terribly during the Second World War.

There it stayed and even after the collapse of the Soviet Union in the 1990’s it was never returned, instead when Ukraine held a referendum on independence in December 1991, fifty four percent of Crimean voters favored independence from Russia.

It agreed to remain part of Ukraine, but with significant autonomy which included its own constitution and legislature and, briefly, its own president.

In 1997, Ukraine and Russia signed a bilateral Treaty on Friendship, Cooperation and Partnership, which formally allowed Russia to keep its Black Sea Fleet in Sevastopol.