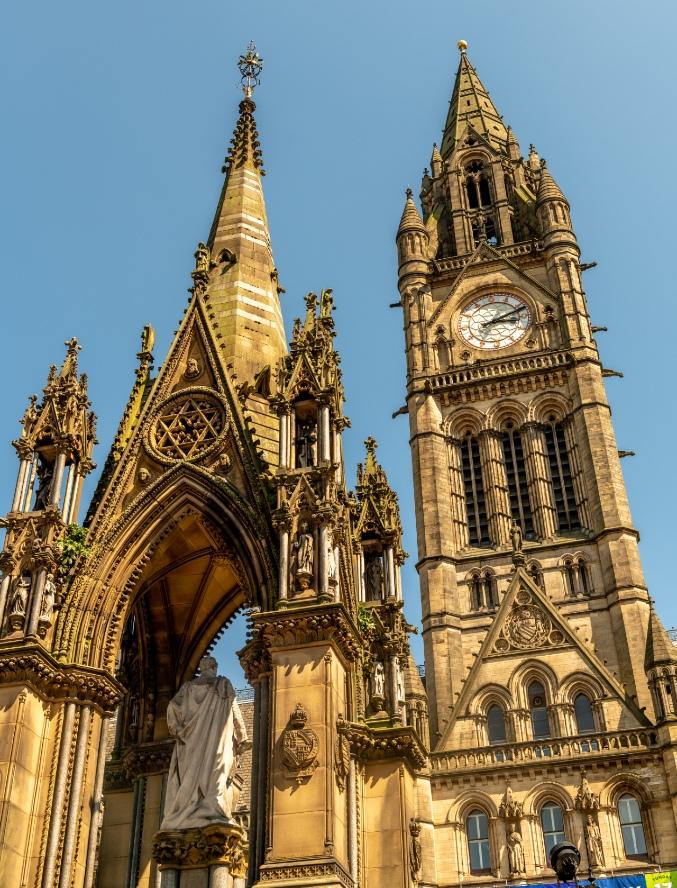 The Town Hall’s 24 bells will be silenced to protect the hearing of project staff, who will be installing scaffolding on the 87 metre-high Clock Tower and the building’s roofs, as part of ongoing work to repair, partially restore and safeguard the iconic Town Hall, while bringing it up to modern access and safety standards.

While the four clock faces will continue to tell the right time, the bells need to be silenced until work around the Clock Tower has been completed and it is safe for them to be switched on again.

Engineers from Cumbria Clocks, who have looked after the Town Hall clock for the past 25 years, will also be removing, renovating and reinstalling the clock mechanism as part of the project.  The clock’s mechanism, which was started on New Year’s Day 1879, is the size of a small car.

In total, there are 24 bells within the Clock Tower, with the Great Hour Bell weighing in at 8 ton 2 cwt.  It was dubbed “Great Abel” in honour of Abel Heywood, Manchester’s Mayor at the time of the official opening of the Town Hall, in 1877.

Built into one of the angle turrets of the 280ft tower is a 173-step staircase leading to the bell chamber and the clock, with its Polish glass face and 10ft-long minute hand.

The inscription on the three clock faces which are visible from Albert Square reads “Teach us to number our Days.”

The bells are likely to remain silent for much of the remainder of the Our Town Hall project, which is due to be completed in 2024.

The once-in-a-lifetime project to safeguard the Grade I-listed gem, while bringing it up to modern accessibility and safety standards, is one of Britain’s biggest heritage schemes.  The work will also see Albert Square transformed to become one of Europe’s finest public squares and events spaces.

Crisis support in Greater Manchester has collapsed, with the amount of support provided falling...

Princess Parkway to be made a permenant 30mph zone