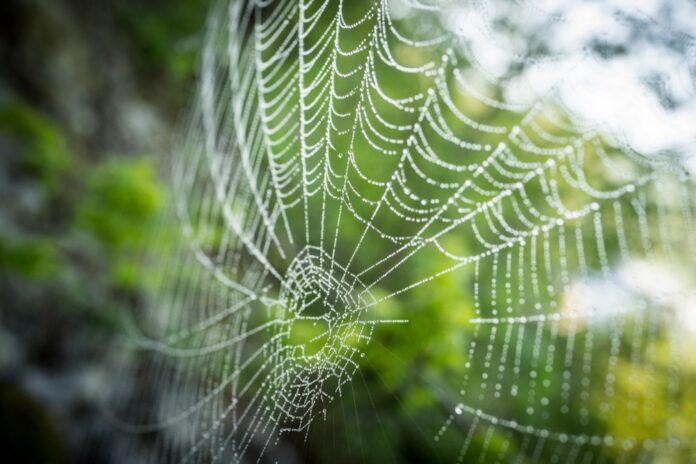 The University of Manchester-based researchers found that their homemade synthetic spider silk glue works as well as commercially available adhesives without being environmentally harmful.

Research published today in the journal Materials Today Bio, shows the spider silk glue was found to be especially good at sticking glass together with an initial adhesive strength rating of 6.28MPa (Megapascals), when compared with a commercial speciality glass glue has a strength of 11.9MPa. The new breakthrough opens the door to a range of sustainable alternatives to an industry which is worth billions of dollars annually.

Dr Aled Roberts from the Manchester Institute of Biotechnology who led the research said: “We found evidence that the mechanism of adhesion was due to unfolding of the protein and reorganisation into a dense hydrogen-bonded structure rich in what are known as ‘β-sheets’.

“This was interesting because natural spider silk has been shown to undergo a similar transformation into a β-sheet rich structure as spiders spin their silk – and is understood to be what makes spider silk so strong and tough. Kevlar® also gets its strength from a densely hydrogen-bonded network.”

Today, protein-based glues have been almost completely displaced by synthetic alternatives, which are produced on a vast scale with the global market totalling $41 billion in 2010. This industrial process from oil contributes significantly to global emissions of greenhouse gasses and volatile organic compounds (VOCs) so alternatives are required.

These findings should help with the design and formulation of other protein-based adhesives which, with further optimisation, could compete with commercial crude-oil derived adhesives and give us renewable, biodegradable and green glues as we had in the past.

Many organisms produce specialised proteins specifically for adhesion. Mussels produce a strong protein-based glue that allows them to stick to slippery rocks in rough inter-tidal zones. Spiders also produce tough silk-based glues which they use to capture fast-moving insects in their webs.

As the world transitions away from fossil fuels and towards a renewable future, there is a growing need to replace CO2-intensive crude-oil derived adhesives with greener alternatives. One option could be to return to return to protein-based glues, who’s properties could be designed and optimised using the tools of synthetic biology.

Unlike synthetic crude-oil derived adhesives, these protein-based glues would be water-based, non-toxic, biodegradable and environmentally non-persistent. They would also be grown under benign conditions (ambient temperatures and pressures) and could be produced through fossil-fuel free, green synthesis routes – via processes similar to the fermentation of beer.

Manchester Councillor who prevented a man from jumping into the canal has been recognised...