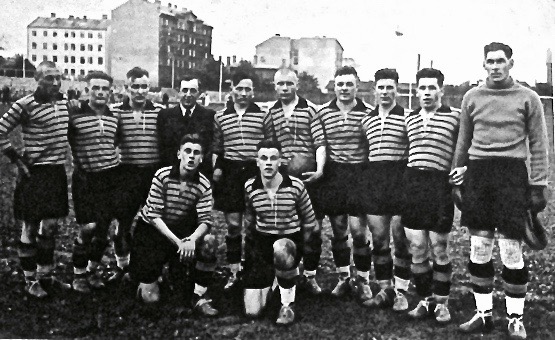 The introduction of a Barcelona-style passing game at a Baltic football club took them to three championships in succession in the late 1930s – but their visionary Jewish coach was murdered by the Nazis.

The tragic story of Otto Fischer, freshly unearthed by Vince Hunt, lecturer in Sports Journalism at Manchester Metropolitan University, will be presented at a sports history conference next month. The award-winning BBC documentary maker was first told about Fischer during research into a book on Latvia during the Second World War.

Austrian left-winger Fischer went into coaching when a knee injury ended his playing career just before the national team – known as ‘The Wunderteam’ – dominated European football with their brilliant passing technique ‘Viennese Lace’. Fischer, from Vienna, played for Austria from 1923 to 1928.

Fischer took over at Olimpija, situated in the Latvian port city of Liepaja, in 1936 following coaching stints in Serbia, Czechoslovakia and Yugoslavia, becoming Olimpija’s fourth Austrian manager. Inheriting a side which had already won lots of silverware in previous seasons and adapting ‘Viennese Lace’ to the individual skills of his players, Fischer overcame early resistance to his methods from players and spectators alike, who thought it was boring to play that way hour after hour. Sometimes the playing staff had to be physically forced to embrace his system – those who didn’t were shown the door.

The results told their own story. Olimpija didn’t lose a game as they won the League in Fischer’s first season, then repeated the feat in 1938 and 1939, averaging more than three goals a game in that final year.

By then record crowds were flocking to watch them and the President was sending Fischer telegrams congratulating Olimpija on their ‘beautiful and masculine game’.

Always in a suit, Fischer learned the language, embraced the city and married a local girl. His football philosophy was never far from his mind. “The team that plays on the ground never loses,” was the first phrase he mastered. He introduced his technique at all levels of the club. “This is a game with less power and more intelligence,” he would say.

The clouds of war and repression were about to envelop Latvia. The Soviets occupied Latvia in 1940-41 and Olimpija was disbanded. When the Nazis forced the Red Army out in late June 1941, the killing of Jews started. Foreign Jews were rounded up and shot on the beach by the city’s lighthouse – it is thought Fischer died here.

His Latvian wife Anna was also rounded up and killed in the massacre of Liepaja Jews on the beach at Skede in December 1941. Virtually the entire Jewish population of Liepaja was murdered by the Nazis. Evidence of the Skede massacres was gathered by a Jewish electrician, David Zivcon, working in a German officer’s apartment who came across four rolls of film, had them developed and buried the pictures for the duration of the war.

Hunt included Fischer’s story in his account of WWII Latvia ‘Blood in the Forest – the end of the Second World War in the Courland Pocket’ (Helion, 2017) and will present his research at a conference of British sports historians in Worcester on September 1-2.

He said: “I was interviewing the veteran Liepaja sportswriter Andzils Remess about his memories of the wartime city when he mentioned Fischer. He told me that the team pleaded with the Nazis not to shoot him and his goalkeeper Harijs Lazdins went several times to ask for him to be spared. Fischer knew the end was coming – he’d gathered all the players at his house a few weeks before, effectively to say goodbye. He knew he was doomed.”

Under German occupation, Latvian sporting fixtures resumed. Nine of Fischer’s players joined new club Daugava Liepaja. Merging with another Latvian team to become Sarkanais Metallurgs, they won the League seven times in ten years between 1948 and 1958. The Olimpija name was briefly revived following independence, but today the Liepaja team at the Daugava Stadium plays under the name FK Liepaja.

Further research into the Fischer period is being directed in Liepaja by Ilana Ivanova of the Jewish Heritage Foundation – the daughter of David Zivcon – who believes his achievement in winning three championships should get wider recognition.

Hunt and Ivanova are appealing to the families of Liepaja footballers from the 1930s and 1940s for memorabilia, photographs and stories so the story of Fischer and his team can be told properly.

Hunt said: “Otto Fischer laid the building blocks for the subsequent success of the club in Soviet times – driven mostly by players who adapted his passing footballing philosophy. They called that period ‘the Fischer time’.

“I am actively researching this story in the hope of finding the families of those players so we can build a bigger picture of Fischer’s legacy and put his contribution into the context it deserves.”