Manchester Poet  Mike Garry has written a rousing poem for BBC Sport to help people “get in the mood for the World Cup”.

The poem has been made into a video for the BBC Sport website that encourages football fans to support their country and get on board with watching the 2018 World Cup to witness moments “never seen before” and “history being made”.

Mike features in the video at 02:35 in a series of talking heads acting out lines from his poem. The video also features standout moments from World Cup competitions of the past.

Mike graduated from Manchester Metropolitan with a BA (Hons) in Library and Information Studies and went on to work as a librarian for 15 years before becoming a poet.

In 2015, Mike was presented the award of honorary Doctor of Education at Manchester Metropolitan in recognition of his generous support and commitment to promoting reading and literacy in young people throughout the UK, and the inspiration his career as a librarian and acclaimed poet represents to our students.

His work with young people in Manchester has also won him awards from the Prince’s Trust and the National Literacy Trust, and he became a “Champion Reader”. 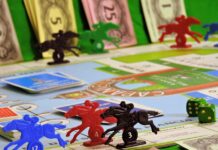 Experience The Thrill Of Online Casinos: How to find adventures at home?