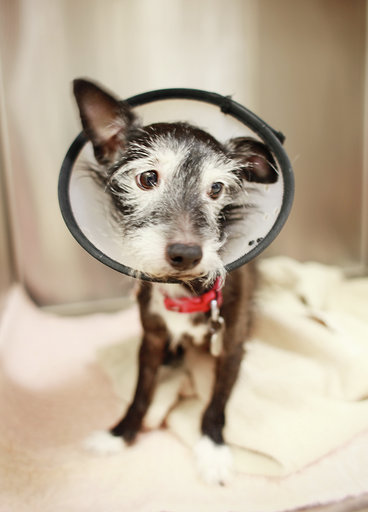 A tiny terrier from Manchester has been selected as a finalist in PDSA’s national Pet Survivor 2019 competition after suffering a terrifying dog attack.

Ten-year-old Trinny was left clinging to life following the ordeal, which took place just before New Year. It was uncertain if she’d survive, and even if she did, her injuries were so severe that she was in danger of losing her leg. But after three operations, and months of dedicated care and nursing from her vets at Manchester PDSA Pet Hospital and her owners, she’s now up for a national award. She is up against five other miracle pets, each with their own death-defying tales of survival, in a public vote.

Little Trinny, who lives in Manchester with her owners Julie Keeling and Mark Asprey, was out on a walk when she was the victim of a terrifying attack from a large dog. The tiny Fox terrier was left clinging to life, with deep puncture wounds to her chest and severe lacerations to her shoulder. Absolutely distraught, her owners rushed her to Manchester PDSA Pet Hospital, where vets warned that she may not survive.

Trinny was in severe shock and her injuries were so bad that, even if she did survive, there was a strong chance that she could lose her leg. But the team were determined to do everything they could to save her, and to try and save her leg if possible.

Trinny was stabilised and stayed at PDSA for a week while she had three operations to mend her wounds and try and save her leg. Mark visited as often as he could, bringing her favourite treats and food in to encourage her to eat. Finally he received the amazing news that Trinny’s leg was saved, and she was well enough to come home.

However, she still needed round-the-clock care and daily visits to PDSA to have her wounds cleaned and dressed. Mark said: “It was a really difficult time for us, as not long after Trinny came home Julie had to go into hospital. She suffers from long term illnesses and was facing having her own leg amputated. I’m her full time carer, so for weeks I was back and forth between visiting Julie at the hospital and taking Trinny to the vet. But she means the world to us so we did whatever it took to get her back on all four paws.”

Trinny was a perfect patient and always had a tail wag for everyone. Three months of recovery and she was back to full health, providing vital companionship for Julie and Mark. She now bounces around as if nothing ever happened, and is still as friendly and loving as ever.

Julie and Mark are eligible to use PDSA’s veterinary services, and the charity covered the cost of Trinny’s treatment, which was around £1,600.

TV vet and Pet Survivor judge Judy Puddifoot said: “Such a traumatic attack at any age is horrendous, but to go through all of that aged ten is remarkable. Well done Trinny!”

PDSA Vet TBC said: “Trinny was in a terrible state when she arrived, at first we weren’t sure she’d survive. But her resilience shone through and she endured months of treatments, wound cleaning and dressings. But she always had a waggy tail for us and it was a delight to treat her, we think she would be incredible deserving of the Pet Survivor title.”